Extraordinary Birthday for our Ordinary

Yesterday Cardinal Collins was appointed a member of the Commission of Cardinals for oversight of the Institute for the Works of Religion (IOR) by Pope Francis. IOR is commonly referred to as the Vatican Bank.

Read the Cardinal's statement regarding this appointment here.

Read this related article from The Catholic Register.
Posted by ARCAT at 13:51 No comments:

What do these people have in common? They are only a few of the subjects of prolific photographer Yousuf Karsh.

Born in Armenia in 1908, Karsh was brought to Canada by his uncle in 1924 and apprenticed with portraitist John H. Garo in Boston from 1928-1931. Karsh set up his own shop in Ottawa in 1931, and achieved international success in 1941 when his portrait of Winston Churchill was featured on the cover of Life Magazine.

Over his five-decade career, Karsh photographed many important and influential people. His work has been featured in many books and exhibits, and he received many industry, academic, and national awards. He passed away in 2002.

Cardinal McGuigan and Cardinal Carter were lucky enough to be captured by Karsh's artistic vision: 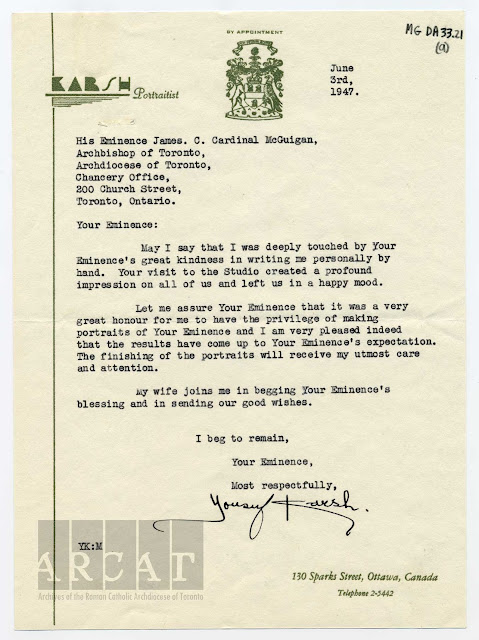 Please visit the Yousuf Karsh official website for more information.
Check the Library and Archives Canada website for information about their extensive Karsh holdings.
Posted by ARCAT at 16:04 No comments: