Record of the Week: The Ceremonies of Holy Week

Our record for this Holy Week is a lecture given by Archbishop Lynch describing the blessing of the Holy Oils.

Holy Week is the week of preparation before Easter Sunday, recounting Christ’s final days on earth.
On Holy Thursday, we remember and celebrate Jesus’ gift of the Eucharist. It is the night when we renew our mandate to serve one another. One Holy Thursday tradition is the washing of the feet, which first took place at the Last Supper.

Chrism Mass and the blessing of holy oils to be used by parishes throughout the year has traditionally been celebrated on Holy Thursday. Our Archdiocesan Chrism Mass is now celebrated on the Tuesday of Holy Week at St. Michael's Cathedral.

L AA12.67, Archbishop Lynch Fonds
You can learn more about the significance of Holy Week and Easter Weekend on our website.
﻿
Posted by ARCAT at 11:54 No comments:

Exhibit Opening: Love Your Neighbour as Yourself 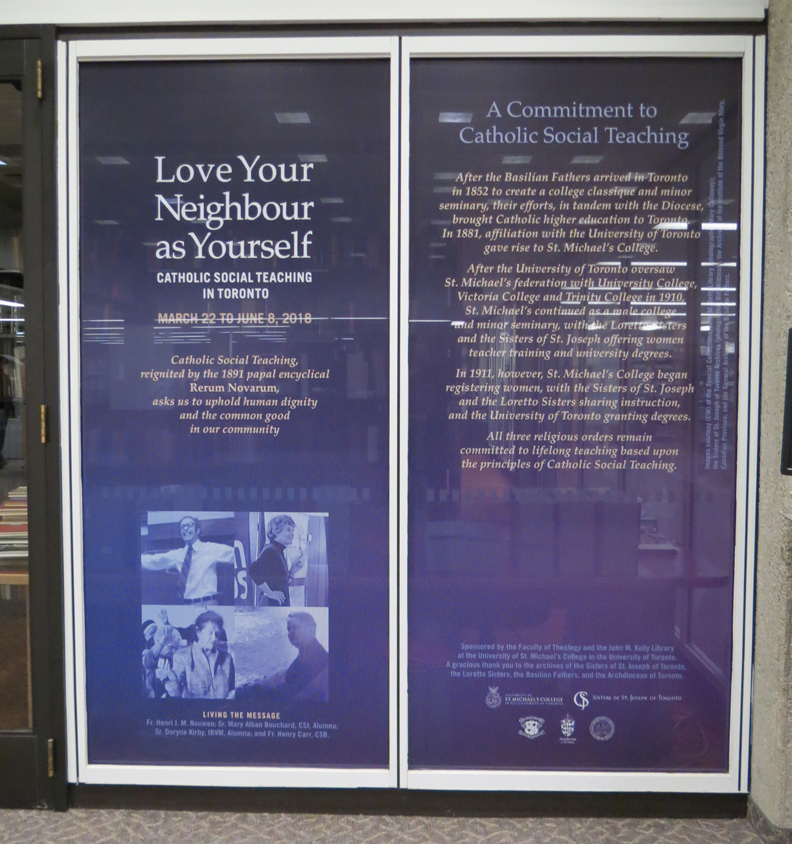 Last Thursday, we had the pleasure of attending the launch of Love Your Neighbour as Yourself: Catholic Social Teaching in Toronto, an exhibition at the John M. Kelly Library, University of St. Michael's College.

The evening began with a public lecture by Most Rev. Paul-André Durocher, Archbishop of Gatineau, entitled Echo Chamber or Megaphone? The Church in Canada and the Prophetic Voice of Pope Francis. Archbishop Durocher gave a brief history of Catholic Social doctrine, which is constantly enriched through the writings of the popes. Specifically, he highlighted quotes by Pope Francis on each of the seven themes of Catholic Social Teaching and also shared anecdotes from his own life and career. We were left with a sense that Catholics really are lucky to have the Church's wisdom on social issues to guide their own decisions.

At the reception that followed, we had a chance to see the exhibit for the first time:


The exhibit was curated by James Roussain, Outreach Archivist at the Kelly Library, who decided to organize content around the seven principles of Catholic Social Teaching. St. Michael's College's community partners, including the Archdiocese of Toronto, were invited to contribute brief narratives that exemplify the themes. Many of these stories highlight active ministries and programs, underscoring the fact that Catholic Social Teaching is active and relevant in the College community.

Special Collections from the Kelly Library are also featured, including material from The Henri J.M. Nouwen Archives and from the G.K. Chesterton Collection.

You can visit the Love Your Neighbour as Yourself exhibition on the ground floor of the the John M. Kelly Library, 113 St. Joseph St., Toronto, until June 8, 2018.

It's St. Patrick's Day tomorrow, so today began with the question, "what kind of records do we have about Ireland?" The answer turned out to be that we have a photo of the school where Archbishop Lynch was raised and received his early education in Lucan, County Dublin, Ireland.

One source explained: "One of the first national schools in the Lucan area was located in the Hollow. It is recorded as being independent until 1833 when it came under the control of the National Board. In 1836 110 boys and 93 girls are recorded being educated there under the auspices of Mr. James Lynch and Mrs. Anne Lynch.One of their sons and a pupil of the school, John Joseph Lynch ... became the first Roman Catholic Archbishop of Toronto, Canada. In 1864, 140 boys and 120 girls are recorded as attending this school with Elizabeth Knight as headmistress. However at this time the school is recorded to have been in a state of bad repair with a very poor supply of schoolbooks and teaching aids.The school finally closed down in 1864 and the pupils moved to two new schools in St. Mary's Church grounds. The girls' school became known as St. Anne's and is still part of the Convent building. The boys' school was Lucan Boys National School, in existence up until 1963. It then became the parish centre until 1994 when it was finally demolished to make way for new development."

"Lucan, an inland town and parish in Newcastle barony, Dublin county seven miles W. from Dublin comprising an area of 1,126 acres of which 33 are in the town. Population of parish l,l39, of town, 563, inhabiting 91 houses. It is situated close to the line of the Great Southern and Western Railway, of which it is the second station from Dublin, and upon the mail-coach road to Galway and Sligo. After the Conquest this place was settled on Richard de Peche, one of the early English adventurers ... The town is prettily situated in a fertile vale, on the east bank of the River Liffey, which is here crossed by bridge of one arch, with granite parapet, surmounted by iron palisades, and consists of one wide angular street of small but neat houses and cottages, most of which are let in summer to visitors and invalids. Its public buildings are, the Parish Church, a neat structure with a tower and spire, a large new Roman Catholic Chapel, and a Wesleyan Methodist Meeting House. It has a Dispensary and a Loan Fund; a Lending Library, and National Schools. It is a Chief Constabulary Police Station and Petty Sessions are held every alternate Tuesday. Lucan is noted for its chalybeate spa, and is much resorted to for its efficacy in scorbutic, bilious, and rheumatic complaints ... The scenery around Lucan is delightfully varied, and in part romantically beautiful, particularly in the grounds of Weston park, in which is the well known and much-frequented waterfall, called the "Salmon Leap;" which consists of a succession of rocky ledges on the Liffey, over which the fish dart at one bound. It forms a beautiful cascade, the picturesque effect of which is greatly increased by the rich and lofty wooded banks of the river, and the adjoining tastefully embellished demesne of the Leixlip Castle..."

You can find more photos of Lucan and area on the South Dublin County Libraries website.

What better opportunity to recognize the work of the Catholic Women's League in Canada, and all that they do to bring women together and to enhance the role of women in the church.
﻿﻿
﻿

On June 17, 1920, a meeting of all C.W.L.'s and representatives from other women's groups was held in Montreal, and the Catholic Women's League of Canada was formally established.  There are now over 1300 parish based C.W.L. councils in Canada that continue to come together every year in a national convention. The League's many accomplishments show us the strength in a united group of women. 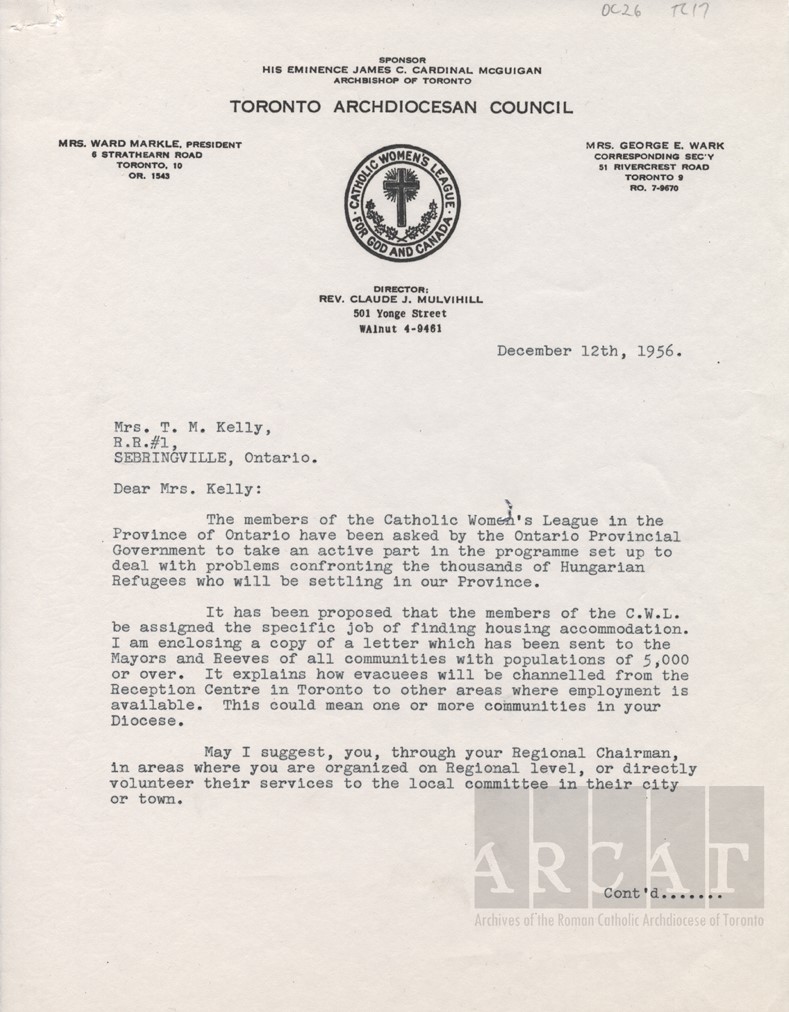 Today and everyday, let's show our thanks to all the women who contribute to the Church, both in our communities and around the world.

We often come across letters seeking the support of the Church for various ideas. Today, we came across a letter from Elisabeth Achelis of the World Calendar Association asking bishops to advocate for a change in the way we label the days of the year. According to her obituary in the New York Times, Achelis wanted to "give the year's measuring stick the stability and permanence of the clock, the ruler, and the scale."

It makes sense that Achelis wrote to Catholic authorities; the calendar most countries use today was created by them. In 1582, Pope Gregory XIII introduced what became known as the Gregorian Calendar, which replaced the Julian Calendar. The problem for any calendar designer comes from the way we divide time. Years are defined by the length of time it takes for the earth to travel around the sun once, months are defined by the phases of the moon, and days are defined by the amount of time it takes for the earth to rotate on its axis. Unfortunately, these aren't wrapped up in a nice mathematical bow. There are 365.2422 days in a year. If our calendar only accounted for the length of a day, over time the beginning of the year would drift through the seasons.

To address this, Julius Caesar added an extra day every four years: a leap year. However, that system still allowed for a gain of three days every 400 years. For Catholics, the issue was that the date of Easter was calculated based on the spring equinox, so eventually, it would be held at a time of year that was not intended. Pope Gregory XIII fixed the problem by making it so that years evenly divisible by 100 would not be leap years unless they were evenly divisible by 400.

However, no system is perfect, and people found issues with the Gregorian calendar. Critics point out that because days of the week don't line up consistently with dates, new calendars need to be printed every year, and holidays and schedules are always different. In 1930, Achelis proposed the World Calendar, which would always start on Sunday, January 1. It would still have 12 months, but each quarter would have three months of 31, 30, and 30 days. An extra, un-numbered day would be added outside the calendar after December 30 as a world holiday to account for the earth's trip around the sun, and in leap years a day would be added after June 30.

Despite some support and the continued existence of a group promoting it, the World Calendar has not yet caught on. The World Calendar Association - International is pushing for adoption in 2023, since that is the next year in which January 1 falls on a Sunday.


For more information about the fascinating and complicated history of the calendar, check out some of these sites: