Record of the Week: A Sappy Photo

March in Southern Ontario is maple syrup season. With warmer weather, starch that was stored in tree trunks over winter gets converted to sugary sap - perfect for making syrup.

This undated photograph shows seminarians trying their hand at collecting sap in jars.  Let's hope they found a lot of maple trees on the grounds of St. Augustine's Seminary; the conversion ratio of sap to syrup is approximately fifty to one.

Is there any better way to entertain children during March Break than feeding them sugar in the form of rich maple syrup poured over snow?

With no end of winter in sight, maple syrup celebrations have been extended this year.  In the archdiocese, you can visit the Sugarbush Maple Syrup Festival in Woodbridge or Stouffville until April 13th to get your maple fix.
Posted by ARCAT at 12:32 No comments:

Record of the Week: Diocese of Toronto is raised to Archdiocese

On this day in 1870, the See of Toronto was elevated to an archdiocese, making Bishop John Joseph Lynch its first archbishop.

This decision was made during the First Vatican Council, 1869-1870 (so-called because it was the first council held at the Vatican Basilica).

As a result of Toronto gaining metropolitan status, the Dioceses of Kingston, Hamilton, and Sandwich were also established as suffragan sees.

In honor of Toronto's 180th birthday, we went into the Archives to see what the Catholic Church in Toronto was like in 1834. We found the following report written for Archbishop McNeil in 1934: 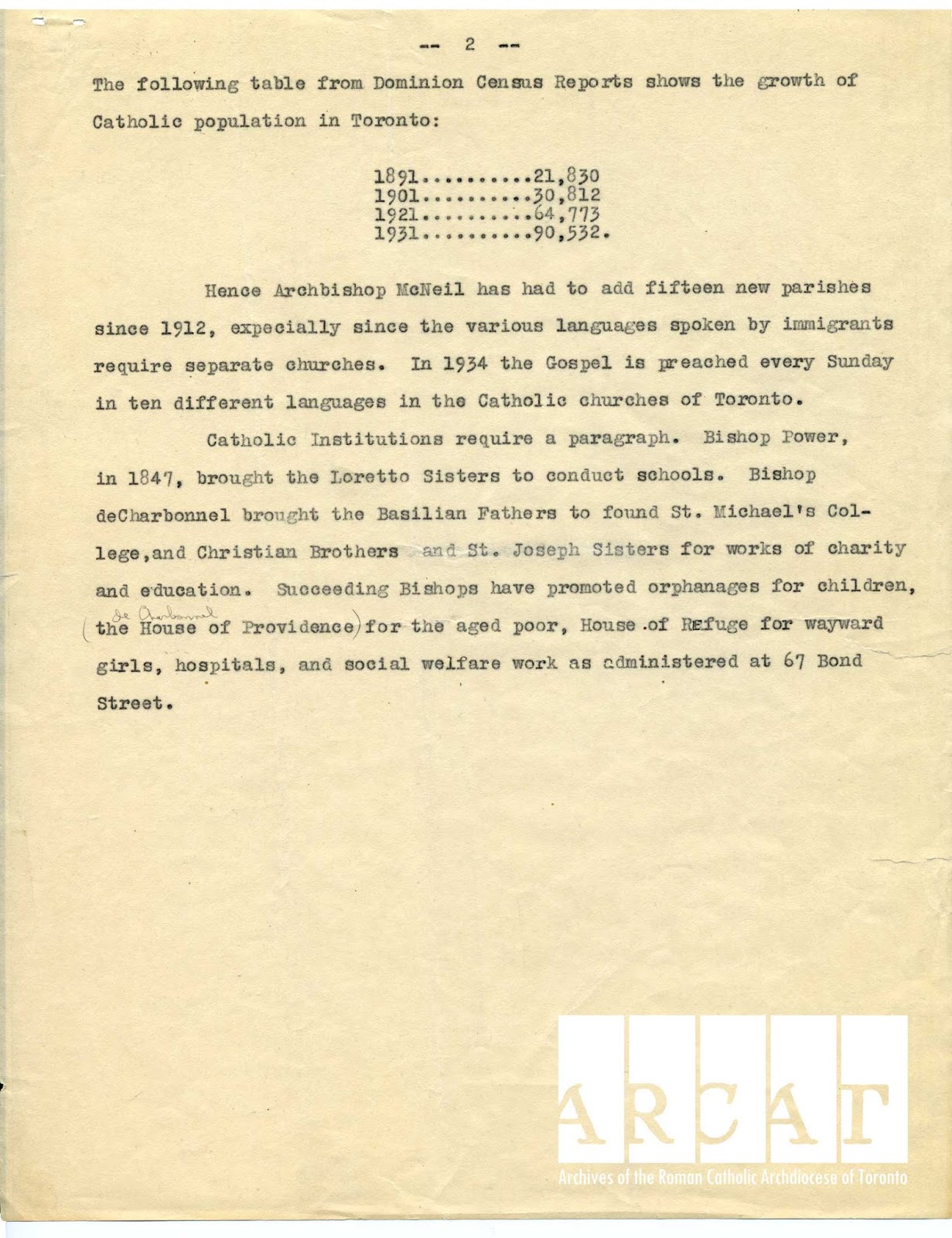 Record of the Week: Regulations for Lent, 1855

Today is Ash Wednesday, which marks the beginning of Lent. Catholics are called to do penance – fasting, prayer, and alms-giving - as they prepare for the death and resurrection of Christ at Easter.

Our Record of the Week focuses on fasting and abstinence. In the Latin Rite, fasting is the limitation of food and drink to one main meal and two smaller meals a day, with no solid foods in between. Abstinence refers to not eating certain kinds of food or drink, typically meat.

Although the general guidelines for fasting and abstaining remain consistent, specific rules have changed over time to reflect socioeconomic circumstances and local tradition. For example, these Lenten regulations were issued in 1855 by the second Bishop of Toronto, Armand François Marie de Charbonnel P.S.S.
Rule No. 5 states:

"An approved custom has introduced a small collation in the morning consisting of a cup of tea, coffee or chocolate, with about an ounce of bread."


"Catholic boarding house keepers will remember that they are obligated in conscience to present to their Catholic boarders such food as Catholics are permitted to use at these meals and on those days when they are bound to observe the law of abstinence."

Although "the use of flesh meat" is restricted to certain days, rule No. 4 allows that "Lard may be used in preparing fasting food."

Current regulations for Lent allow one to substitute works of charity for fasting.


"Let this holy time be for all days of retirement and prayer, days of penance and alms-giving, days of grace, fervour and salvation."