A panoramic photograph was recently donated to us that features an impressive group shot of people standing in front of St. Patrick's Church, Toronto, during the 3rd German Catholic Convention of the Province of Ontario in 1937. Upon receiving the photograph, it was evident that it had been rolled up for quite some time due to its strong curl. In an effort to flatten the photograph while minimizing the risk of cracking, the photograph was placed in our humidification chamber and flattened. For more information and instructions on how to humidify and flatten an item, check out our previous blog post on the topic.
After the process was complete, this is what I was left with:
﻿ 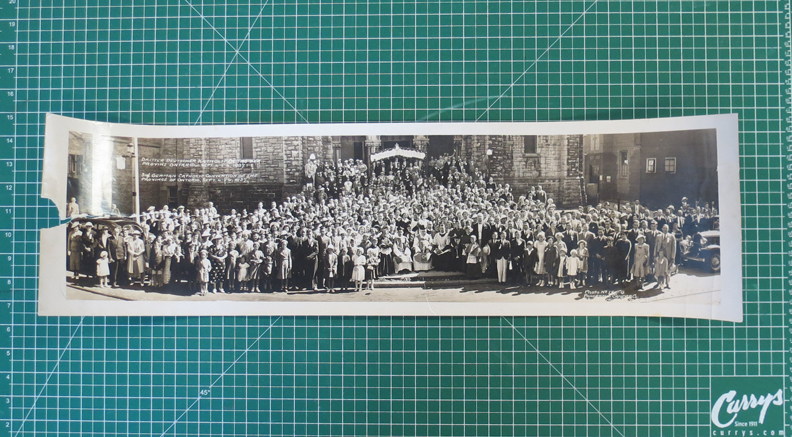 While I was happy with the results, I was reminded that paper fibres have the ability to remember how they have been treated in the past. Therefore, I wasn't confident that this guy wouldn't attempt to curl himself back up again.

To ensure that the print remain flat, I decided to encapsulate it and mount it. Here's how I did it!

Mylar acts to keep the print flat as well as provide support. It also protects against fingerprints and its transparency allows the print to be viewed while in its enclosure. I chose a more sturdy foam core board to mount the print since I wanted to ensure that it would not curl again. If this is not a concern, you can opt for any kind of archival board.

First, you want to measure the panoramic photograph.

Next, you want to cut two identical pieces of Mylar that are large enough to cover the entire print with 5-8cm of extra Mylar on all sides. 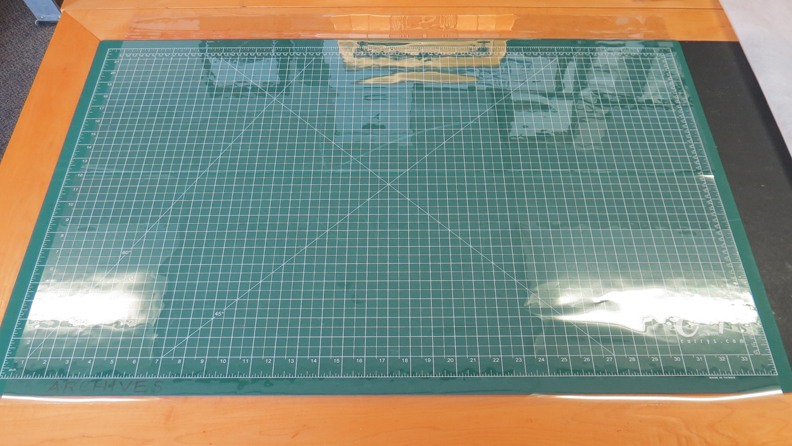 I recommend taking this opportunity to clean any dust/debris from the Mylar sheets using any regular microfibre cleaning cloth: Next, apply the double sided tape to one piece of Mylar. I recommend only applying tape on the long edges, that way the print is secured but you're still able to slide it in and out of the enclosure. 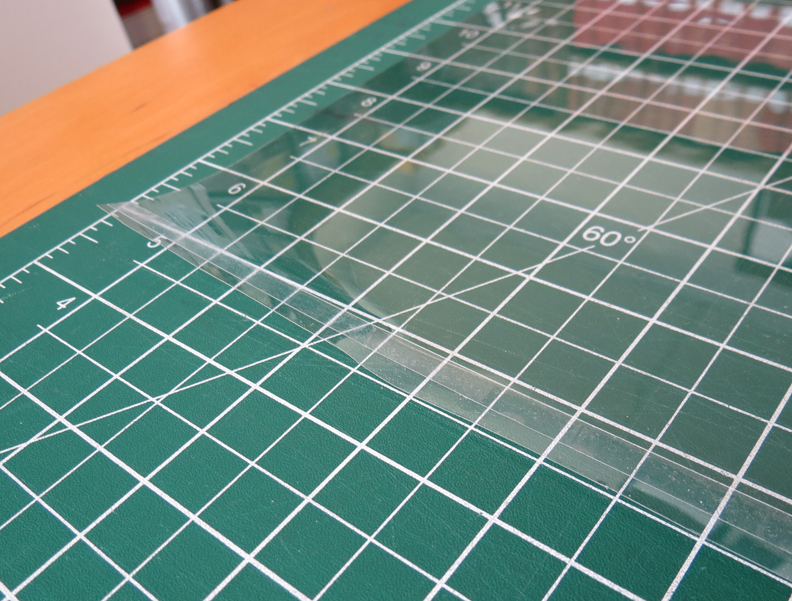 Once you put the second piece of Mylar on top of the first, you can slide the print into the sleeve you've created. Since it was a challenge to line up both pieces of Mylar perfectly, I ended up trimming the edges to clean it up.

After this, you can put double sided tape on the back of the encapsulated print along the two long edges and stick it to your mounting board.

Next, trim the excess mounting board from the print leaving as much space as you prefer. I decided to trim it so it aligned with the edge of the Mylar. 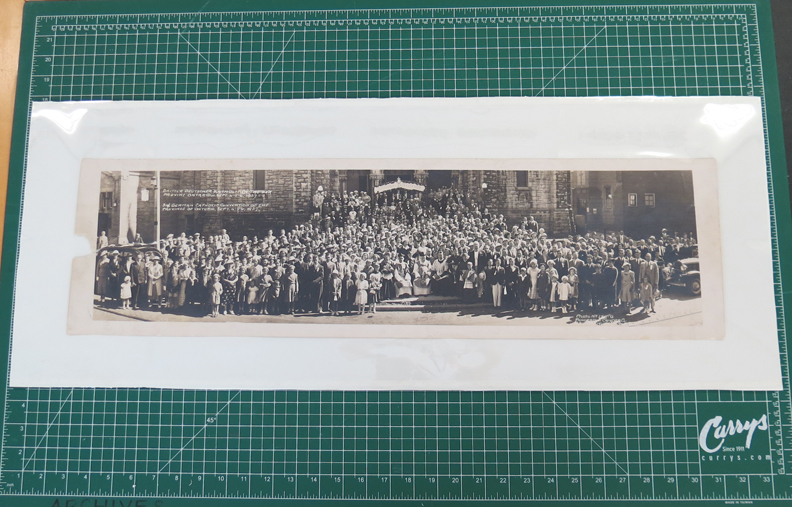 For more information on caring for panoramic photographs, check out this Kathleen A. Kinakin's Thesis on the topic.
Posted by ARCAT at 10:45 No comments:

Stand Up and Be Counted

In the variety of records available to historians and genealogists, censuses are among the most useful. They are a snapshot of the population at a particular time. The data can be overwhelmingly voluminous, but a lot can be learned both about the population and about individual citizens.

Though there were censuses as far back as ancient times, the first census in North America was completed in 1666 by Jean Talon, the Indendant of New France. He listed 3,215 people living in and around Quebec City, Montreal, and Trois-Rivieres, and used the information to plan how to make the population and economy of the colony grow.

After confederation, a census of Canada was taken every ten years starting in 1871. The first census was important to ensure the makeup of parliament accurately represented the population.

In 1931 Canada's first Dominion Statistician, Robert H. Coats, wrote to Archbishop McNeil to convey the importance of the general Census of Canada and to ask for his help in urging parishioners to participate. He highlighted that the information collected would only be used for statistical purposes because historically censuses had been used in some places to identify who to tax or who could serve in the military.


Governments aren't the only ones who use censuses to make plans for the people they represent. The Church also needs statistics to be able to responsibly and effectively allocate resources and enhance programming. In addition to using the civil census to track the population and demographics of an area, the Archdiocese also collects statistics about each parish.

The earliest example we could find of a bishop collecting statistical information about the area in his care was this 1827 document. Though it doesn't list the individuals in the area, it has the number of Catholic males and females under and over the age of 16 in South Western Ontario.


There were several examples of documents like the one below, which was created for St. Paul's Parish in 1838. It tells us that in the area that St. Paul's served (the City of Toronto and area - 1,296 square miles!), the population is 2,500, of which about 750 generally attend mass. Under "Remarks," it notes that the people are "Labourers & poor mechanics - very few rich though several are respectable;" and of the church, "There is no school - no sacristy - no bell - Burying ground attached not well fenced." 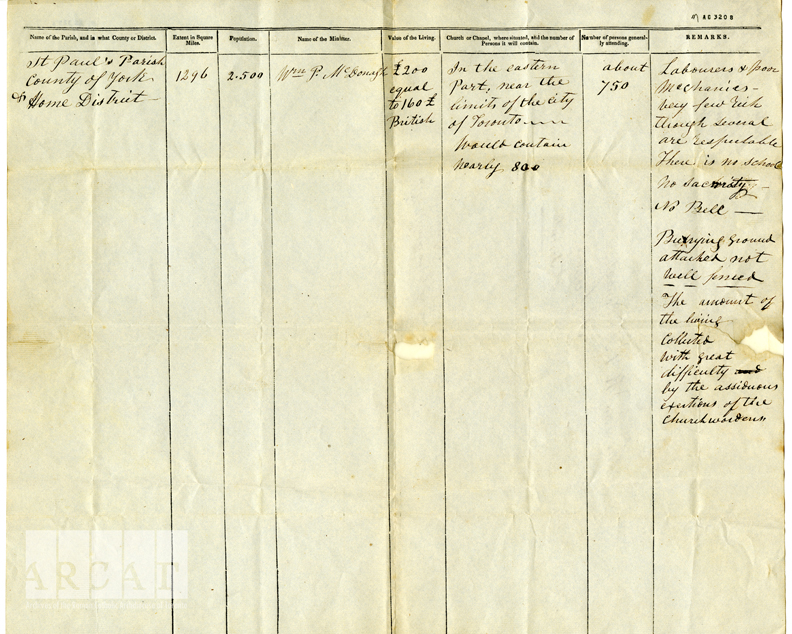 Other pastors actually listed each family in an area, which is great for genealogists!


Some even went as far as to canvas Toronto neighbourhoods collecting information such as the name of the head of each family, the ages of the inhabitants, religion, and occupation. ARCAT has a few notebooks listing residents of the wards of St. David, St. Lawrence, St. James, St. George, St. Andrew, St. John, and St. Patrick. Below is an example of John Elmsley's 1847 list showing some Queen St. inhabitants.

If you'd like to check out the Catholic "censuses" that we have here in the archives, check out our website for more information!

The Archdiocese of Toronto on the World Wide Web

"...Now we have the Internet. The content of what we wish to tell remains the same: Jesus Christ and his Church."

These were the words of Cardinal Ambrozic when the Archdiocese of Toronto officially launched its first website back in 1999.

March 12th of this week marked the 30th anniversary of the World Wide Web and Tim Berners-Lee first model of a hyperlinked, global information system. We thought it would be a fun opportunity to take a look back at the history of our online presence.

The Archdiocese of Toronto announced its website on December 16, 1999. In the press release announcing its launch, the Archdiocese described how archtoronto.org "offers visitors not only information on the parishes, social and other services, [but also] public statements and activities of the Archdiocesan community."

For well over a century, March 8th has been celebrated as International Women's Day. Since 1911, this day has brought attention to women's struggle for equality and celebrates the social, economic, cultural and political achievements of women.


To appreciate how far we've come, let's jump back 80-90 years. With the stock market crash in 1929, the 1930s were marked with great economic struggle. The Toronto Civic Unemployment Office and Central Bureau for Unemployment Relief was created in 1930, and in 1932 the Public Welfare Department began finding jobs for the unemployed through relief work. By 1933, the unemployment rate for Torontonians reached 30%. Within the Archdiocese, the Catholic Adjustment Bureau was created specifically for unemployed Catholics, with Rev. Michael John McGrath leading as its Director.


At the same time, the 1930s brought better employment opportunities for women in female-dominated occupations and many women became the primary breadwinners for their families. In her book, Breadwinning Daughters: Young Working Women in a Depression-Era City, 1929-1939, Katrina Srigley examines how young women were central to the labour market and family economies in Toronto during this time.

This shift in gender roles challenged the stereotypes of men being the sole providers and women remaining home to care for the children. While many women enjoyed this independence and economic responsibility, it left many men feeling ashamed for not being able to provide for their families. In the context of the time, this shift was quite jarring for society.

As a response, Rev. Michael John McGrath anonymously wrote to the editor of the Globe and Mail proposing a solution:


It was news to me that many states in the U.S. enacted legislation during the 1930s that removed married women from competitive gainful employment.

Now, let's jump to today. International Women's Day gives us a chance to celebrate women and our changing attitudes about their role in the world. IWD is celebrated at the Vatican and marked with a number of events sponsored by various groups looking to bring women's voices to the forefront. Last year, the Vatican called for more gender equality in the Church, specifically at the Vatican level. Pope Francis has spoken out against the continuing marginalization of women, and recognizes that a more gender-balanced world is a better world overall.

From the women at the Archives of the Roman Catholic Archdiocese of Toronto, we wish you a Happy International Women's Day!
Posted by ARCAT at 16:15 No comments:

March is here! Today I learned that Pope Leo XIII dedicated this month to St. Joseph, whose feast day is March 19th, in his 1889 encyclical Quamquam Pluries.

St. Joseph was special to Canada from the earliest days of the Recollect missionaries: they chose him as the patron of New France. From the chapel at Fort Ste. Marie to today's parishes and schools, many places in the Archdiocese of Toronto have been named after St. Joseph.

St. Joseph's Parish in Leslieville was erected in 1878 and the first church was dedicated in 1886.

The Sisters of St. Joseph have a long history of serving the people of the Archdiocese of Toronto. They had a convent on Wellesley Street from 1863.

The first St. Joseph's in Highland Creek, Scarborough, was completed as a mission church in 1856:

St. Joseph's Church in Streetsville, Mississauga was consecrated in 1858:

Beaverton also has a St. Joseph's since the 1850s:


The Sisters of St. Joseph founded St. Joseph's Hospital in 1921 on the site of their west-end orphanage:

One among many schools named for St. Joseph, the high school in Barrie was first opened in a former Sisters of St. Joseph convent in 1946. Go Jags!

Clearly St. Joseph has had an influence on the Archdiocese of Toronto! This month, we can say Pope Leo XIII's Prayer to St. Joseph:

To thee, O blessed Joseph, we have recourse in our affliction, and having implored the help of thy thrice holy Spouse, we now, with hearts filled with confidence, earnestly beg thee also to take us under thy protection. By that charity wherewith thou wert united to the Immaculate Virgin Mother of God, and by that fatherly love with which thou didst cherish the Child Jesus, we beseech thee and we humbly pray that thou wilt look down with gracious eye upon that inheritance which Jesus Christ purchased by His blood, and wilt succor us in our need by thy power and strength.

Defend, O most watchful guardian of the Holy Family, the chosen off-spring of Jesus Christ. Keep from us, O most loving Father, all blight of error and corruption. Aid us from on high, most valiant defender, in this conflict with the powers of darkness. And even as of old thou didst rescue the Child Jesus from the peril of His life, so now defend God's Holy Church from the snares of the enemy and from all adversity. Shield us ever under thy patronage, that, following thine example and strengthened by thy help, we may live a holy life, die a happy death, and attain to everlasting bliss in Heaven. Amen.