Labour Day: More Than Just a Day Off

Labour Day Weekend is already upon us. We think of it as the last chance to pack in some summer activities before school starts; however, the origins of the holiday lie in the Labour Movement of the 19th century. As industrialization took hold and cities became more crowded, workers were subjected to long hours, poor conditions, and unfair wages. Unions were formed to represent workers' interests, eventually resulting in improved working situations through collective bargaining as well as labour laws.

Canadian Labour Day can be traced to March 25th, 1872, when the Toronto Typographical Union went on strike for a nine-hour work day. Joanna Dawson of Canada's History Magazine writes, "On April 14, a group of 2,000 workers marched through the streets in a show of solidarity. They picked up even more supporters along the way and by the time they reached their destination of Queen's Park, their parade had 10,000 participants - one tenth of the city's population... The parade that was held in support of the strikers carried over into an annual celebration of workers' rights and was adopted in cities throughout Canada. The parades demonstrated solidarity, with different unions identified by the colourful banners they carried. In 1894, under mounting pressure from the working class, Prime Minister Sir John Thompson declared Labour Day a national holiday."

The Labour Movement gave us many things which we now take for granted. Weekends, child labour laws, fair pay, benefits, sick days, paid vacations, lunch breaks, pensions, harassment laws, unemployment insurance, the 40-hour work week, occupational health and safety rules, minimum wage, and paid holidays. This Monday when you are relaxing, take a moment to be thankful for the working environments we now enjoy in Canada!

For more information, check out the Canadian Museum of History's online exhibit.
Posted by ARCAT at 14:05 No comments:

The Toronto Islands have been a summer recreation destination since they came under the City’s jurisdiction in 1867.  By the late 1800s, the Islands boasted resort hotels, amusement areas and Toronto’s first cottage community.  Many of Toronto’s wealthiest families built large Victorian summer homes here.

The Islands are considered part of the parish of St. Michael’s Cathedral.  At first, Catholic summer residents were ferried back to the mainland to fulfill their Sunday obligation. Following WWI, there were almost 200 Catholics summering here, which justified the building of a local mission church.  The cornerstone was laid in 1921 and Mass was held in a cottage while the church was completed.

The rustic building was designed by architect James P. Hynes in the half-timbered style of exposing the wood frame.  The interior woodwork was of British Columbia pine and the walls were not originally plastered. The oak pews came from St. Michael’s Cathedral.


The church of St. Rita-on-the-Island was dedicated by Archbishop Neil McNeil on July 16, 1922. Thereafter, in the summer months, a priest from the Cathedral would come by ferry each Sunday to celebrate Mass and share brunch with the cottagers.  The women of the parish were very involved in the church’s upkeep, donating flowers in rotation, providing music and running fund-raisers.  In fact, the patron saint of the church was chosen by a Mrs. French, who had obtained a large building donation from the O’Keefe Estate. (The late Eugene O'Keefe, founder of the O'Keefe Brewery Company, was a Catholic philanthropist and benefactor of St. Augustine's Seminary.)

In the late 1950s, the Municipality of Metropolitan Toronto decided to make the Islands more accessible to the general public by eliminating private homes (with some exceptions on Algonquin Island and Ward’s Island). Land leases were not renewed, residents were paid compensation, and the summer homes were razed.  As part of this parkland rezoning, the churches of St. Rita’s and St. Andrew by-the-Lake (Anglican) were relocated to another part of the Centre Island. 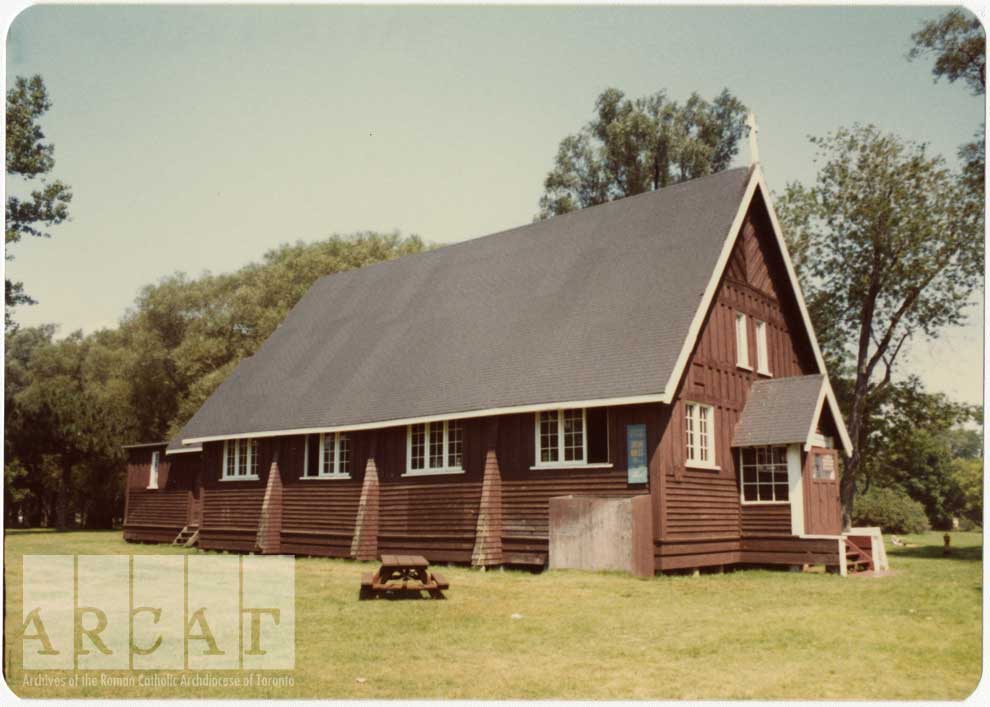 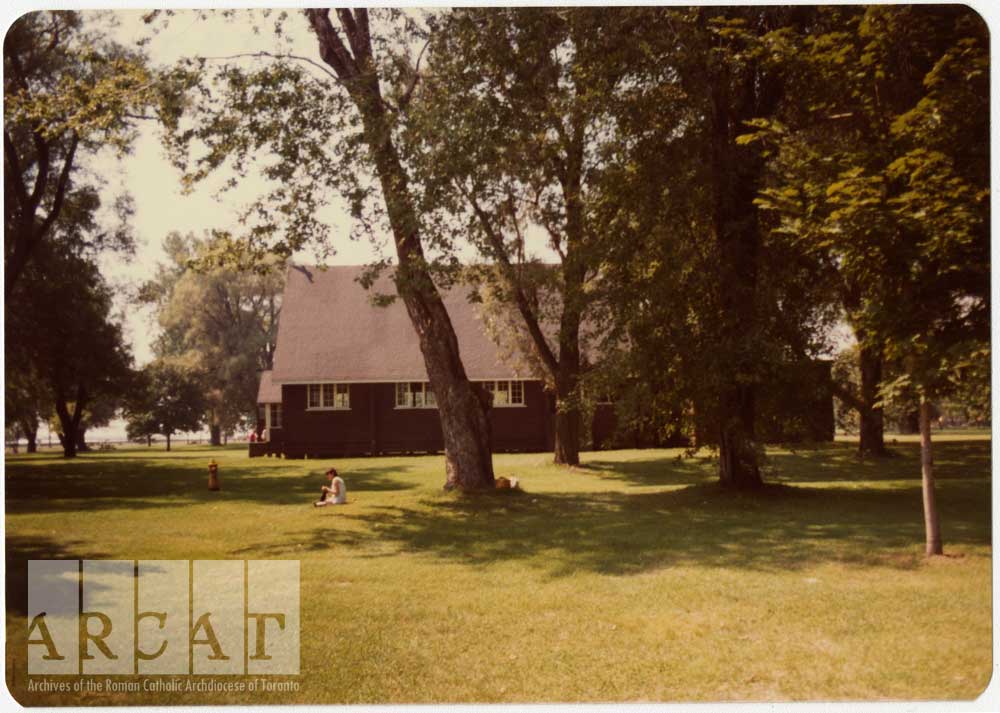 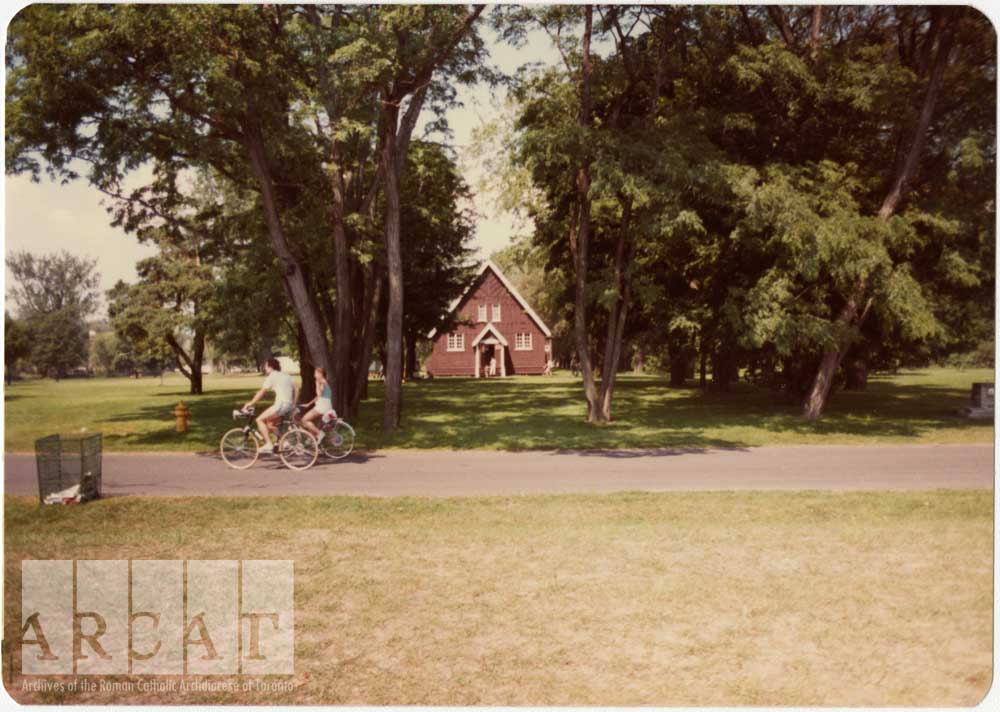 By 1968, both churches had fallen into structural disrepair and attendance had dropped. The Toronto Parks Commissioner proposed keeping only one building for both Anglican and Catholic services. In 1983, the Municipality decided to demolish St. Rita's and renovate St. Andrew’s because of its historical significance as the first church on the island. Some of the furnishings from St. Rita's were placed in the restored church, including the traditional oak pews and the Stations of the Cross. The refurbished building was re-dedicated as an interdenominational church, bearing both saints' names, in an ecumenical service on June 24,1984.

Though Catholic services have not been offered since 1995, St. Andrew by-the-Lake is still an active Anglican parish that can be attended today.

Commemorating the 100th Anniversary of the First World War

This week Canadians commemorated the 100th anniversary of our nation's entry into the First World War. On August 5, 1914, Britain declared war on Germany, which meant that Canada was also involved. Before the war ended in 1918, 620,000 people were part of the Canadian Expeditionary Force. 67,000 were killed, and 250,000 were wounded.

The Catholic Church considered itself impartial, and condemned the fighting. However, it did play a part. Many chaplains were fielded, and parishes participated in relief efforts.

At ARCAT we have records of another way the Catholic Church tried to help. Within the office of the Secretary of State of the Holy See, the Ufficio Provvisorio per Informazioni sui Prigionieri de Guerra (Temporary Office for Information on Prisoners of War) was formed. As detailed in an article "The Vatican and The Missing" in The Sacred Heart Review (Volume 58, Number 13, 8 September 1917 pp. 8-9), the office was formed in response to letters that Pope Benedict XV had been receiving from many countries with pleas for assistance in finding information about captured and missing soldiers. Catholic officials across Europe were able to visit prisoners of war and gather information, which was meticulously filed and made available to family members.

Archbishop McNeil assisted Catholics of the Archdiocese by personally writing to the office. Below is an example of a response which was received:


Below is a letter to Archbishop McNeil from an official of the Canadian Bank of Commerce, writing on behalf of Sir John Aird for information about his son, Hugh R. Aird. 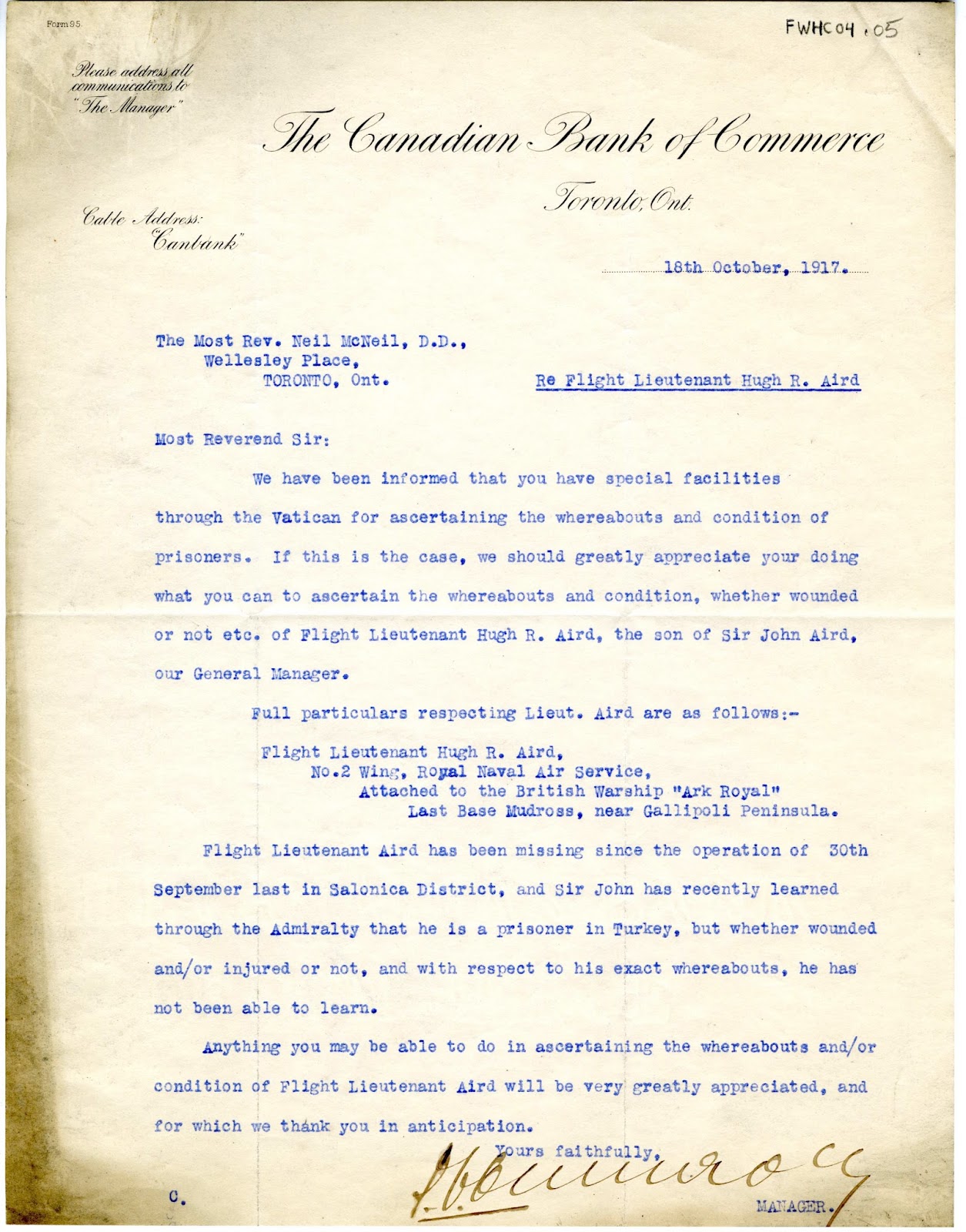 We don't know what happened to Hugh R. Aird while he was in Turkey, but we do know that the family received a response: 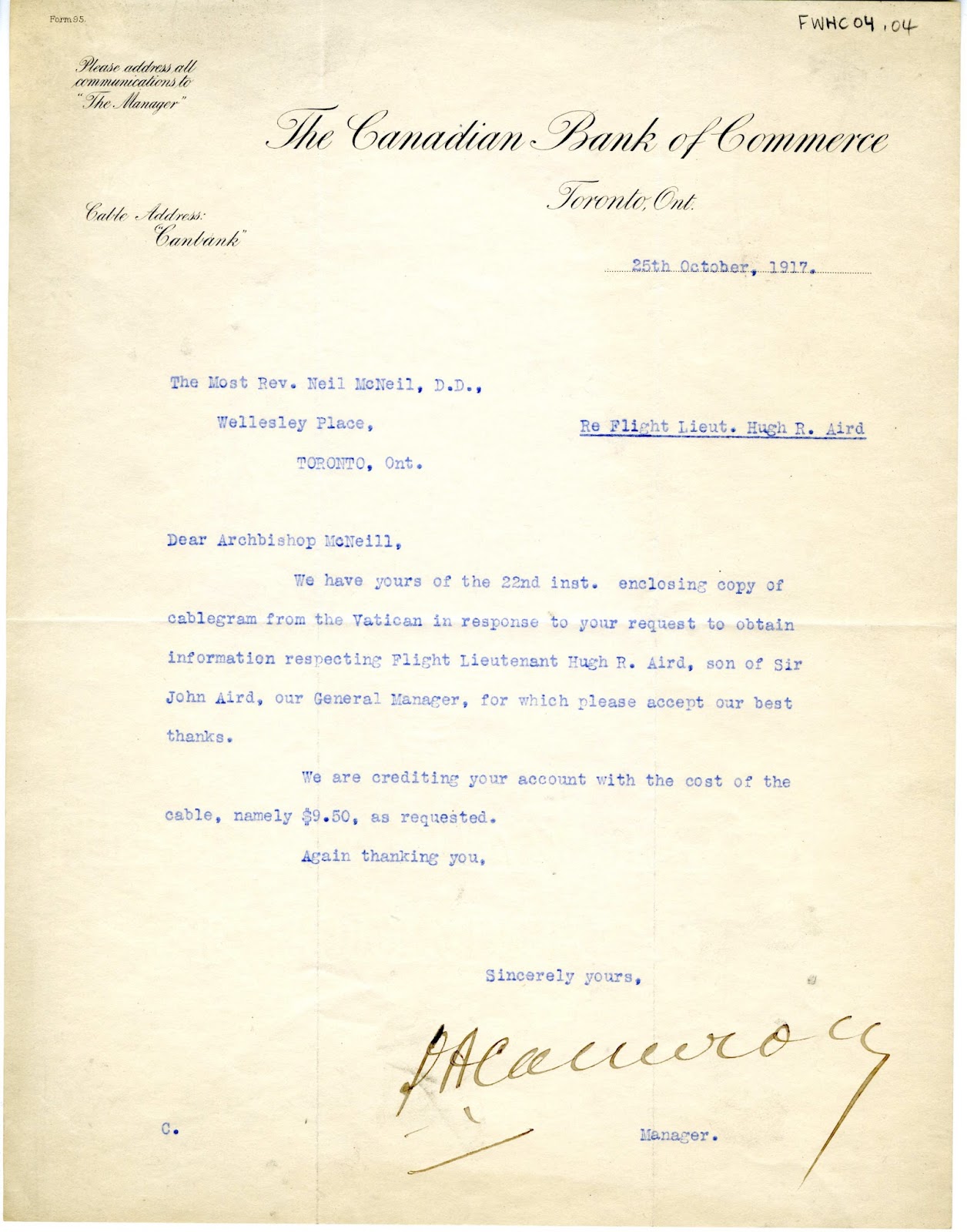 Other things we know about Hugh are that he was born on September 2nd, 1892, and that he was a lumberman when he enlisted in February, 1915. He was 5'8", and had fair hair and blue eyes. His father, John Aird, lived at 89 Madison Avenue in Toronto. This information comes from Hugh's attestation paper, which can be found in Library and Archives Canada's Soldiers of the First War database.

Hugh's name can be found in a list of men who were in Eaton's Machine Gun Battery, but we know from his father's letter that he eventually became a part of the Royal Naval Air Service and served in the Gallipoli Campaign.

We do know that Hugh was able to make it home safely, because he went on to marry, and he became the father of John Black Aird, the 23rd Lieutenant Governor of Ontario.

We also know that Hugh died in 1971 and is buried at Mount Pleasant Cemetery in Toronto, as found on the website findagrave.com.

The 'Great War' was extremely brutal and devastating to human life. By remaining impartial, the Catholic Church was able to bring comfort to soldiers and their families. As Archbishop McNeil explained in his 1918 pastoral letter The Pope and the War, "The Pope is necessarily neutral in this war. He is in justice obliged to be impartial. Catholics are patriotic in their respective countries. The war has made this clear. Whether right or wrong in judgement, they are convinced of the justice of their respective countries' cause, whether French or German. If the Pope publicly condemned either group of belligerents at the outbreak of war or at any stage of it, he would thereby place many millions of Catholics in the agonizing necessity of choosing between their Church and their Country, and he would favor one section of the Church at the expense of another. The war would go on in any case."

As we take time to commemorate this event in history, we pray that the lessons that were learned between 1914 and 1918 will be remembered and that peace can be attained for all people.
Posted by ARCAT at 12:41 No comments: