A March Down Yonge Street: Archives and the Upper Canada Rebellion

At the archives we have the privilege of interacting with historical events through the documents we care for. Books tell us the broad details of history, but letters and photographs tell us how those events affected individuals.

For example, we have several documents that relate to the Upper Canada Rebellion. In 1837, a group of prominent gentlemen who did not like the way that Upper Canada was being administered decided to stage an armed takeover. On December 5th, a group of approximately 700 rebels marched south on Yonge Street from Montgomery's Tavern, which was located at the site of present-day Postal Station K, at the corner of Yonge and Eglinton. They were met and quickly turned back by a group of loyalists. A few days later, a loyalist force dispersed the rebels from the tavern.

We don't know the context of the below document, but for some reason, Bishop MacDonell received certification that Edmund Barnet served with the loyalist force and was injured. Perhaps he was an employee of the Bishop?

As we have seen in past posts, it was common for people to write to bishops for intercession on behalf of loved ones in different situations: 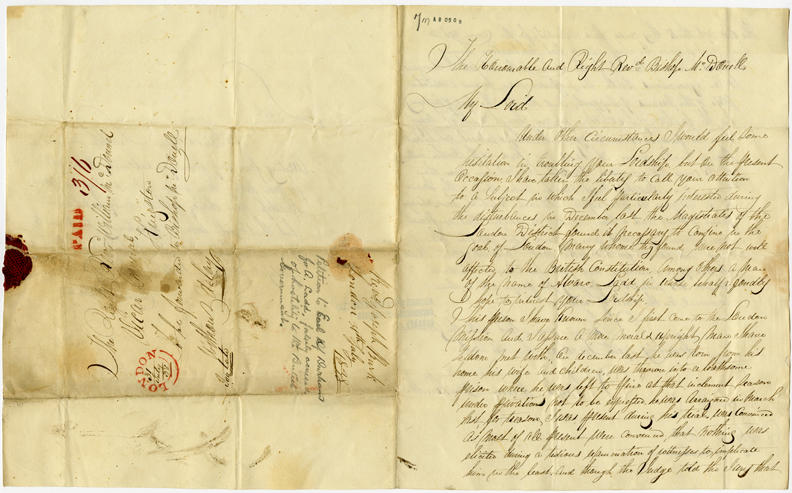 Alvaro Ladd, a prominent London area merchant, was involved with a group of rebels who decided to march on Toronto from southwestern Upper Canada. This group was also quickly stopped. Ladd's arrest and trial are described by Colin Read in The Treason Trials of 1838 in Western Upper Canada (pp 106-109) which can be found in the book Canadian State Trials: Rebellion and invasion in the Canadas, 1837-1839, edited by Frank Murray Greenwood and Barry Wright. As explained by Read, Ladd escaped execution.

The University of Western Ontario Archives holds the Dennis O'Brien Fonds. O'Brien was an early merchant in London, and was a supporter of the Catholic Church in that city. He was related to Ladd through his wife's sister, to whom Ladd was married. As a Church benefactor, O'Brien was able to gain the favour of the local Pastor, who advocated for Ladd.

Through these and other documents, we are able to see a small part of  the stories in Canada's history. When combined with documents held by other archives, the story is fleshed out and given life. Like pieces of a mosaic, letters, photographs, and artifacts combine to create a picture of where we have been as a society. It is imperative to preserve these pieces to ensure that the picture remains a clear reflection of the events that made us what we are today.