The Evolution of Ecumenism

This week we celebrate the Week of Prayer for Christian Unity, which runs from January 18 - 25. Events during this week bring together people from different Christian denominations to talk and pray together to foster mutual understanding.

Today, the idea that Christians should respect each other and find common ground is accepted as a given, but it's no secret that different denominations didn't always get along. Differences in belief were exacerbated by political and social pressures, and the will to understand one another was lacking.

The archival record reflects how attitudes towards ecumenism (practices promoting Christian unity and cooperation) have changed over time. Consider the following examples from the ARCAT stacks:

In 1835 a Catholic who signed as "A Friend to the Good Cause" wrote to Bishop Macdonell regarding Catholic marriages. The writer was very scandalized that Protestants and Catholics were allowed to marry, and that Catholics were being married by Protestant clergy.

The feeling seems to have been mutual. In 1849 Bishop Power received a letter from a Protestant regarding Catholic devotion to Mary: "... Consequently such service must be ten degrees worse than heathenish superstition. Oh alas! without all doubt the Great God, who will not give his worship or glory to any other, must be greatly offended at such idolatry. In the name of common sense abandon such damnable, forbidden and unscriptural worship before the Lord sweep off the earth as he is at present doing, with a sudden disease all Priests in Christendom together with their deluded victims." (P AB13.02)

However around this time there was some desire for Christian unity. Bishop Power had in his possession a published "Prayer for the Unity of the Holy Church" written by a "Priest of the English Church:" 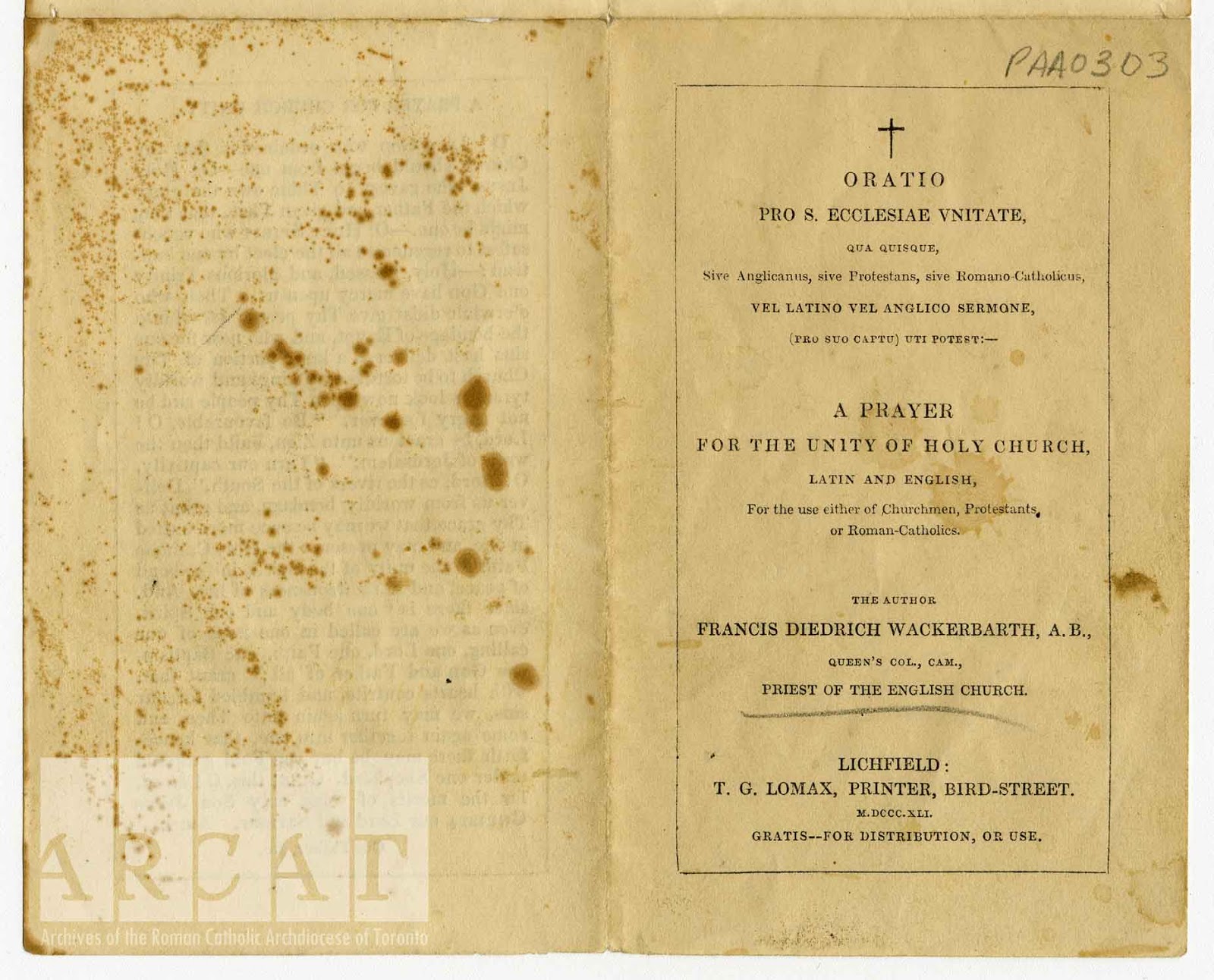 In the 1880s Archbishop Lynch wrote "Being appointed by your saintly predecessor over twenty years ago to the See of Toronto, one of the most Protestant and bigoted cities in America, where everything Catholic is assailed ... with the utmost malignity, we undertook our task by striking at the root of their intolerance, which was principally pride and ignorance." (L RC63.17) Lynch had to deal with a city in which the antagonism that existed between Irish Catholics and British Protestants was very much a reality. The lack of desire for dialogue would have gone both ways.

In 1897 Archbishop Walsh gave a lecture regarding the differences between Catholics and Protestants. The title was less than diplomatic:

By mid century, the Church's position was beginning to soften. In a 1949 letter, bishops were encouraged to continue to pray for Christian unity, but to be careful to make sure that their Parishioners were not participating in "initiatives" that did not rest upon "correct principles"  (MG RC295.02).

In the early 1960s, big changes were in store for the Church. The Second Vatican Council produced a document called Unitatis Redintegratio, or Decree on Ecumenism. This document explains, "We must get to know the outlook of our separated brethren." It calls upon Catholics to work towards unity "according to his talent."


As Archbishop Pocock put it in 1965: "With regard to ecumenism, we can rejoice together at the great progress that has been made during the past two years. Members of different communions are now meeting together quite frequently to pray for Christian unity and for the solution of other serious problems. In a spirit of true charity Protestants and Catholics, Anglicans and Orthodox, are coming to regard one another with trust rather than with suspicion and to associate in a spirit of Christian love. Through theological discussion at many levels, we are beginning to understand and respect one another, and are thereby taking the first steps toward unity in faith" (PO CO05.04).

In 1995 he wrote a Pastoral Letter, Ut Unum Sint or On Commitment to Ecumenism. He explained, "Christians cannot underestimate the burden of long-standing misgivings inherited from the past, and of mutual misunderstandings and prejudices. Complacency, indifference and insufficient knowledge of one another often make this situation worse. Consequently, the commitment to ecumenism must be based upon the conversion of hearts and upon prayer, which will also lead to the necessary purification of past memories. With the grace of the Holy Spirit, the Lord's disciples, inspired by love, by the power of the truth and by a sincere desire for mutual forgiveness and reconciliation, are called to re-examine together their painful past and the hurt which that past regrettably continues to provoke even today."

Today, the Archdiocese of Toronto maintains an Office of Ecumenical and Interfaith Affairs. This office is very involved in ecumenical activities throughout the diocese, and has been involved in the planning of this year's Week of Prayer for Christian Unity, which culminates in an ecumenical prayer service on Sunday January 25th.

As Pope Francis said, " The Holy Spirit creates diversity in the Church ... and this diversity is very rich and very beautiful. But then, the Holy Spirit also brings unity, and in that way, the church is one in its diversity."
Posted by ARCAT at 17:40