May Day 2017: Only YOU Can Prevent Archives Fires! 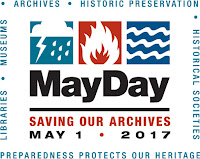 In the world of archives, May 1 is a day to think about disaster preparedness. We take a lot of care to control the environment in which we store sensitive material, but all of that work can be destroyed if we're not prepared for events such as fires or floods. This week we are looking at some examples of fire prevention and preparedness among the Catholics of Toronto.

One of the earliest examples is from 1853. Someone made an "inventory of books and documents of value deposited in fire proof closet in bishop's palace." The list includes account books, correspondence, and sacramental records (you might even say this is the earliest version of ARCAT!). Archivists still recommend that records vital to the function of an organization are stored in a way that protects them from fire.

The person who invested in a fireproof closet would have had in mind the Great Fire of 1849 that destroyed almost 15 acres of property only a few block away from St. Michael's Cathedral near the site of today's St. Lawrence Market, including Old City Hall, St. James Anglican Cathedral, and many other shops and offices.

In 1922 Archbishop McNeil had a three-ply tin clad sliding fire door installed in the House of Providence between the laundry and boiler rooms. Fire doors can be the difference between the survival and loss of life and property, as evidenced by the legendary story of the librarian who saved the Library of Parliament by closing the fire doors as centre block burned in 1916. Today, fire doors are a part of building codes, and ideally archival storage rooms are built using material that can withstand heat.

The House of Providence was no stranger to fire. In 1886 a stove in an attic room ignited bedding and furniture. Luckily, the fire department was able to contain the blaze, and all of the residents were evacuated safely.


In 1929 the Association of Canadian Fire Marshals resolved to take steps to limit the risk of fire caused by the use of nitrocellulose x-ray film. In archives, nitrate film requires special care and storage. It is extremely flammable, and if stored improperly, the film can degrade and release gasses that can spontaneously combust under the right conditions. Few archives store nitrate film, choosing instead to copy it and destroy the original.

The 1929 resolution below was in response to a fire at the Cleveland Clinic that started in the x-ray film storage room and resulted in severe loss of life. Archbishop McNeil would have had an interest in this issue because of the Catholic hospitals in his care.


In the 1920s and 1930s Archbishop McNeil corresponded with the Dominion Fire Commissioner. He wanted to work with the Archbishop to ensure that Catholic lives and buildings in the Archdiocese were protected from fire.

Part of his motivation may have been a pair of fires that occurred in 1922. In March of that year, Ste. Anne de Beaupre Basilica was destroyed as the result of faulty wiring. In December the Basilica in Quebec City, which was dated from the 1650s and was opened by the first Bishop of Quebec burned. The conflagration resulted in the loss of countless artistic, cultural, and spiritual treasures.

Each one of these documents is an example of learning from past mistakes and an attempt to stop history from repeating. We benefit from previous tragedies and disasters because they allow us to take proactive preventative steps to protect our resources. Lets use this week to do the things that make our collections safer!