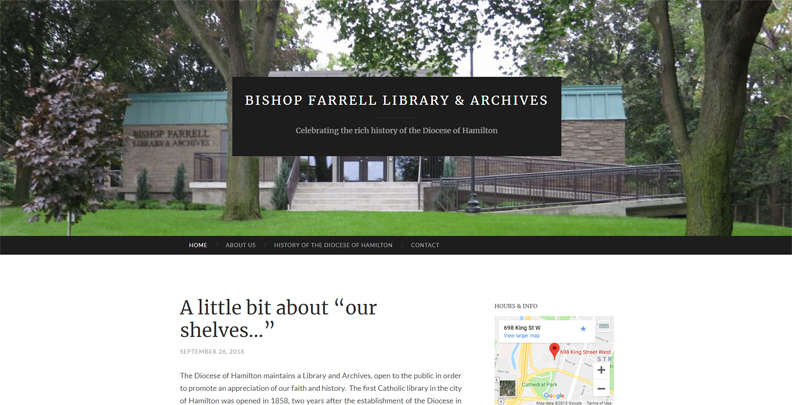 We are pleased to share that the Diocese of Hamilton Library & Archives launched a blog last week, with a post entitled, A little bit about “our shelves…”

Congratulations to the team at the Bishop Farrell Library & Archives! We look forward to following you.

It's been five years since this impressive repository opened its renovated facilities next to Cathedral Basilica of Christ the King. It's worth a visit - both online and on-site.

Toronto and Hamilton dioceses have a special relationship, being part of the same ecclesiastical province. In the Catholic Church, a province consists of a metropolitan archdiocese and one or more suffragan dioceses headed by diocesan bishops. Toronto is the metropolitan see of the ecclesiastical province of the Archdiocese of Toronto, which is why our ordinary is called an archbishop. Hamilton, along with London, St. Catharines and Thunder Bay are the suffragan dioceses. The insignia of a metropolitan archbishop is the pallium.

One of the responsibilities of the metropolitan archbishop is to call and preside over provincial councils. These assemblies of bishops are held to discuss ecclesiastical affairs and enact disciplinary regulations for the province. Toronto was a suffragan diocese of Québec until it was raised to an archdiocese in 1870. After being elevated to archbishop, Most Rev. John Joseph Lynch of Toronto called the First Provincial Council in 1875, which included Bishop Crinnon of Hamilton, Bishop Walsh of London, Bishop Jamot of Peterborough, and Bishop Duhamel of Ottawa. In the 1880s, both Ottawa and Kingston were elevated to metropolitan sees and provinces shifted accordingly.

Bringing the focus back to Hamilton, we offer a great photograph from our holdings of the episcopal ordination of Most. Rev. Joseph Ryan, the sixth and longest serving bishop of the Diocese of Hamilton.

And now we'll leave the blogging about Hamilton to our Hamiltonian colleagues!