It's time to celebrate! Strike up the band! This week was Cardinal Collins' birthday. He was born January 16, 1947. Here in the archives we started wondering what it would have been like for for Cardinal McGuigan in 1947. He had been made Cardinal the year before and was a celebrated leader in the city. The second world war had just ended, and people were thinking about what to do with returning soldiers, as well as reconstructing Europe, and the threats of communism and fascism. The population was rapidly growing as European immigrants moved to Canada and country folk became city dwellers. Lots of changes were coming!

In Toronto there were about a million people. The Maple Leafs won the Stanley cup that year, the St. Mike's Majors won the Memorial Cup, and the Argos won the Grey Cup. The movie Gentleman's Agreement picked up three Oscars including best picture, and music by Frank Sinatra, The Andrews Sisters, and Al Jolson was popular. Radio was well established in the home, though it would soon give way to television.

The King was George VI, the Prime Minister was William Lyon Mackenzie King, and the Premier was George Drew:

The Pope was Pius XII:

In 1947 Cardinal McGuigan lived at 264 Old Yonge Street, where he was visited by a few Sisters of Saint Joseph on September 6: 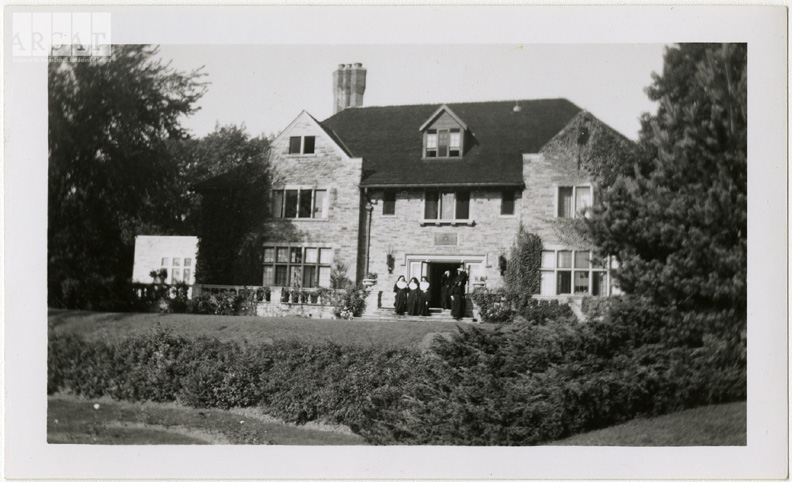 One of the highlights of his year must have been his June trip to the Marian Congress in Ottawa, where he was Papal Legate:

The Congress drew a few hundred thousand pilgrims to Ottawa, and there were many spectators for the parade held in its honour:

Besides being a frozen moment in time on a sunny Saturday in June 1947, photos like this allow us to see some of the fashions that year. Many of the women's outfits were still the boxy utility style of wartime, but were giving way to more feminine shapes:

For more of 1947's high points, including footage of Cardinal McGuigan at the Marian Congress, the CNE, the Stanley Cup game, and the Santa Claus Parade, check out this amazing video posted by Library and Archives Canada:

And for more footage of Cardinal McGuigan and the Marian Congress, check out this video: