Record of the Week: the mysterious Death Mask

Today is All Hallows' Evening - or Hallowe'en if you enjoy grammatical contractions. With its roots in Western Christianity, All Hallows' Eve is the vigil before All Saints' Day. All Souls' Day follows on November 2nd, commemorating all the faithful departed.

Essentially, this part of the liturgical year is for remembering the dead. So what could be more appropriate than a death mask?

Death masks are typically plaster casts of a person's face taken after death. Before the invention of photography, they were often created as mementoes of the deceased, or as a reference for portraiture. Masks of unknown corpses were also made to help with identification.

Our own plaster piece was in desperate need of identification. It was described as 'unknown death mask' in our artifacts catalogue. For the purposes of this blog, we wanted to cast some light on the issue (weak pun intended).

Handling the mask gingerly with cotton gloves, we searched for any identifying marks:

Lo and behold, inscribed in the plaster is "O. A. CASTRUCCI 1911".  Our database did not find any Toronto clergy with this surname.  However, an online search confirmed that Castrucci Co. was a plaster cast studio located on Yonge Street in Toronto.*  This made us pretty confident that the deceased must be an important local figure.

Out of biological necessity, masks are created close to the date of death, so we searched our database to see who had died in 1911. Amazingly, two Archbishops of Toronto - Fergus McEvay and his predecessor, Denis O'Connor, C.S.B. - died within weeks of each other in the middle of that year.

Both of these bishops were robust in life and similar-looking, as evidenced by their portraits below. Both men died after suffering from disease, which would account for the gauntness of the face in the death mask.

After very little deliberation, we determined that this is likely the face of Most. Rev. Fergus McEvay, fifth ordinary of Toronto (1908-1911).  His prominent aquiline nose, which is noticeably crooked at the end, was the deciding factor.

More on death masks: some of the most famous death masks include those of Dante Alighieri, Mary Queen of Scots, and Napoleon Bonaparte. The Laurence Hutton Collection of Life and Death Masks at Princeton University Library contains over a hundred likenesses of English and American literary and political figures.
_______________________________
*Klempan, Brabara. "Early Manufacture of Artists’ Materials in Canada: A History of Canadian Art Laboratory," Journal of the Canadian Association for Conservation, 37 (2012): p.50.
Zucchi, John E. Italians in Toronto: Development of a National Identity, 1875-1935 (Montreal: McGill-Queen's University Press, 1990), p.148.

This Sunday, Pope Paul VI (1963-1978) will be beatified, which is the first step towards sainthood.  The ceremony is scheduled for the closing Mass of the extraordinary Synod of Bishops on the family.

For many years, this mosaic portrait of Pope Paul VI has stood over the Archives' workroom.  It's one of those pieces that has been here for as long as anyone can remember; no one knows how it got here.
Everything about the mosaic remained a complete mystery to us until the Summer of 2021, when the daughter of Luigi Nasato contacted us identifying her father as the creator. Italian by birth, Mr. Nasato moved to Argentina before settling in Canada in 1959. He worked as a mosaicist for years before the focus of his career shifted towards helping redesign churches after the Second Vatican Council. Thanks to a photograph shared by Mr. Nasato's daughter, we know the mosaic was completed and hanging in the Conn-Arts studio by 1965.
Luigi Nasato's prolific public works of art were donated  to York University.

One interesting factoid about mosaics: all of the "paintings" that decorate the interior of St. Peter's Basilica in Rome are not paintings at all; they're mosaics. As a tour guide once explained to me, paintings fade but mosaics last forever. And all of the artwork inside the Basilica was designed to stand the test of time.

You can read more about the Paul VI's beatification in this Catholic Register article.

At Thanksgiving, we gather with family and friends to be mindful of our blessings.
Thanksgiving is also a harvest celebration; there is no denying that many of us will indulge in the abundance of food prepared for the Thanksgiving feast.

In the spirit of food and feasting, we decided to post some historical menus from various celebrations...some of them featuring a variety of very weird and wonderful dishes.


We couldn't resist finding recipes for some of the more interesting dishes from these menus:

Are you inspired to make Turkey Galantine for your family this weekend? Perhaps they would prefer Boiled Turkey with Oyster Sauce, or a Pyramid of Spring Chicken, or Arches of Buffalo Tongues.

For more historic menus, check out the Toronto Public Library's virtual exhibit Local Flavour, and the New York Public Library's What's On The Menu project.
Posted by ARCAT at 07:00 No comments:

Today the 2014-15 NHL season begins.
Thirty-five years ago, G. Emmett Cardinal Carter, then Archbishop of Toronto, opened the 1979-1980 hockey season at Maple Leaf Gardens. A postcard was printed to commemorate the occasion.

It was a significant year for Carter; he was elevated to the Sacred College of Cardinals in June of 1979.

The Toronto Maple Leafs will be playing another home opener tonight, this time against arch rivals, the Montreal Canadiens. Cardinal Carter was born and educated in Montreal.  We wonder who he would have been cheering for... 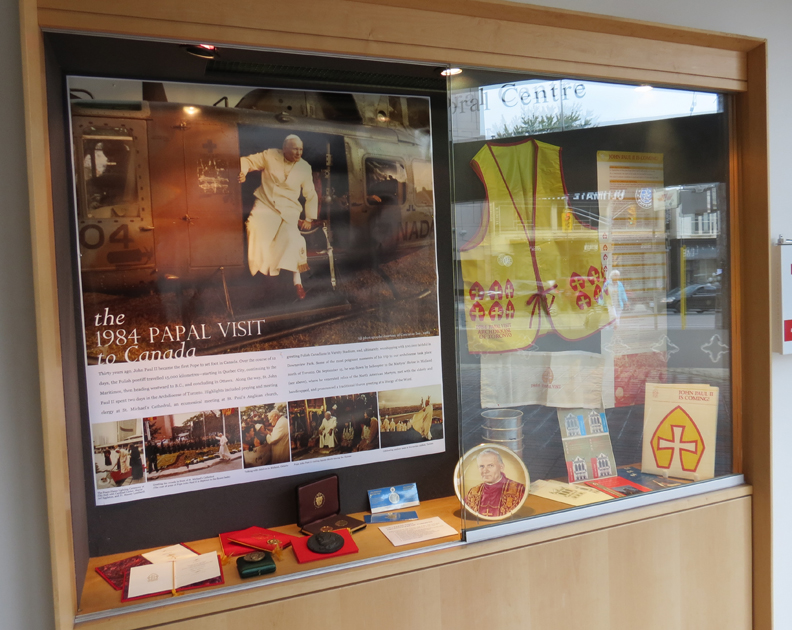