It's our 200th post, so we thought we would talk about another important 200: 200 Church Street, aka St. Michael's Palace, aka the Cathedral Rectory. Since it was first opened in 1846, many bishops and other clergy have resided there. It has been said that the Palace is one of the oldest buildings in Toronto that has continually been in use for its original purpose. When the Palace was first built its residents were outside of the bustle of downtown, but now they are in the thick of it.

We don't have any images of the Palace from its earliest days, but here's how it looked in 1932:

In its location next to the Cathedral, St. Michael's Palace has been the scene of Papal greetings, celebrations, picnics, study, reflection, and prayer. Here's the menu from Archbishop Walsh's jubilee dinner held on site:

Through receipts and ledgers we can learn a little about what life was like for those living at the Palace. There are receipts for groceries, coal, and other supplies. We have an 1870s inventory of the dishes on hand (there were 12 heavy silver table spoons, but only 11 teaspoons). Below is a list of receipts and expenditures for August, 1877:


You can read more about the history and character of the building in the booklet below which was written by architectural historian Christopher Thomas for the occasion of the 1982 dedication of the historical plaque that stands in front of the rectory:


Thanks to our readers for sticking with us through 200 posts, and we look forward to the next 200!

On this Day: the Ordination of Bishop Michael Power

One-Hundred and Ninety years ago on August 19th, fifteen years before the Archdiocese of Toronto was created and hundreds of kilometres north-east of the Town of York, our first Bishop, Michael Power, was ordained a priest.

This week’s blog post features a copy of a letter written just before Bishop Power's ordination took place. The letter is addressed to Archbishop Panet of the Archdiocese of Quebec from the auxiliary Bishop J.J. Lartigue.

The letter records an important milestone in Bishop Power's religious life. It is also an early testimony of the strong relationship between Bishop Power and the Irish community that became part of his lasting legacy. It reveals a small but significant moment in our timeline, and is surely an event that should be remembered as we celebrate and reflect on the history of our Archdiocese.

You can find out more about Bishop Michael Power on our website. 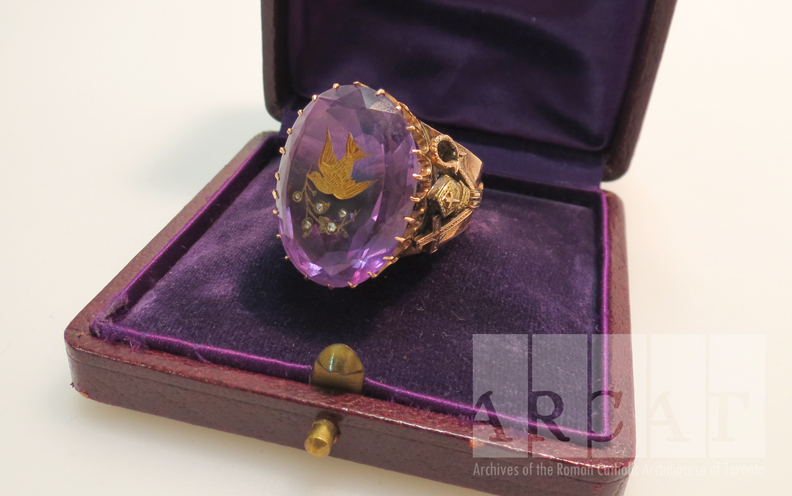 Provenance is a fundamental organizing principle in archives. It refers to the individual, family, or organizational body that created or accumulated material in a collection. The principle of provenance dictates that records of the same origins be kept together to preserve their context, rather than grouping items of various origins together by subject (the way books are catalogued) or medium (as artworks may be).

As provenance is intrinsic to our profession, it is very frustrating to be faced with an item whose previous owner cannot be identified. With textual records, there are often clues, but an artifact without accompanying documentation can be a real mystery.

Last year, custodianship of some of our former bishops' rings was transferred from the Chancery Office to the Archives. Unfortunately, it was not clear as to which of our bishops these rings had belonged.

A Roman Catholic bishop receives an episcopal ring when he is consecrated. Aside from those personally purchased or gifted, bishops' rings belong to the Church. The ordinary of a See inherits the previous bishop's ring collection, which is held in trust. A bishop may be buried with a ring that he owned, but all those belonging to the Church must be returned upon his death. Bishops may also choose an episcopal ring formerly worn by a predecessor, which can further obscure its provenance.

From this tradition, we can conclude that the episcopal rings transferred to the archives were likely worn by a bishop that retired or died in Toronto. One of the rings in question has two dates engraved on the band: "Nov. 10-1867 and Nov. 10-1890". The former is a significant date to only one of our ordinaries: Archbishop John Walsh was consecrated bishop on that day, after being appointed Bishop of Sandwich (i.e. Windsor), the former seat of the Diocese of London, Ontario.

Case closed? Not quite.

Most Reverend Walsh was appointed Archbishop of Toronto on August 13, 1889 (coincidentally, 128 years ago today) and installed here on November 27, 1889. Therefore, the second date seems to have little significance to Archbishop Walsh. The word "and" in the engraving suggests (at least to me) that the dates refer to the same person rather than a subsequent wearer.  In any case, November 10, 1890 does not pertain to any of our other bishops.

To determine if the ring was ever worn by Walsh, we checked his official portraits taken in London and in Toronto. Unfortunately, it's not a match. The ring in the photos seems to have a large central stone encircled by a halo of small diamonds. The setting is lower than that of our mystery ring.


The mystery ring is certainly larger and more ornate that the ring he is wearing in the portraits, which is probably the ring from his consecration gifted by the Toronto clergy. Most Reverend Walsh began his career in Toronto and was much respected by his fellow priests. According to the Jubilee Volume 1842-1892 of Archbishop Walsh and the Archdiocese of Toronto, the clergy presented "a mitre, crozier, pectoral cross and ring" to "their dearly beloved brother."

Though the photos do not confirm that our mystery ring belonged to Archbishop Walsh, they do not remove the possibility either. Bishops may own multiple episcopal rings, and they are a common gift. Fancier ones may be saved for special occasions rather than everyday use.

One could speculate that he was given this ring to mark his elevation to archbishop on the anniversary of his consecration date. November 10, 1890 would have marked the first anniversary of Walsh's consecration that he celebrated as Archbishop of Toronto. Although it would have been more appropriate to bestow an archbishop's ring on Walsh at his Installation Mass in 1889 (or, for that matter, in the Jubilee year of 1892 when the diocese turned 50 and Walsh celebrated 25 years of ordination), it is not completely outside the realm of possibility.

Until further information comes to light, that frustrating question mark will stand beside the issue of provenance.

To read about provenancial mysteries that we've actually solved, see these former posts:


***We are also happy to announce this week that the short biographies of our former bishops and archbishops (which used to be hosted on ARCAT's now defunct website) have been migrated to the Archdiocese of Toronto's site. You can read more about Archbishop Walsh here.***

Record of the Week: Here's One For the Music Geeks

If you've ever attended a graduation ceremony, or even seen one on television, the writer of this week's highlighted document will be familiar to you. Sir Edward Elgar was a British composer whose Pomp and Circumstance March No. 1 in D has been played at North American high school and university graduation ceremonies since 1905 when it was performed at Yale University:

Of course that's not the only thing that Elgar is known for. He was wildly popular with early 20th century audiences, and is now regarded as a preeminent figure in the pantheon of British composers. Elgar was a Catholic, and one of his masterpieces was The Dream of Gerontius, which was based on a poem by Cardinal Newman.

In 1925 Elgar wrote a letter in reply to J. Campbell McInnes, a British singer who moved to Toronto in 1919. McInnes had written to Elgar to ask him to visit Toronto as part of his efforts to improve the state of local Church music. Unfortunately, there's no evidence to suggest that Elgar actually accepted the invitation, but we are pleased to have the signature of such an influential composer here in the archives:

We have featured the signatures of many interesting historical figures in The Archivist's Pencil, but this one is special for certain music geeks amongst the archivists.
Posted by ARCAT at 09:07 No comments: