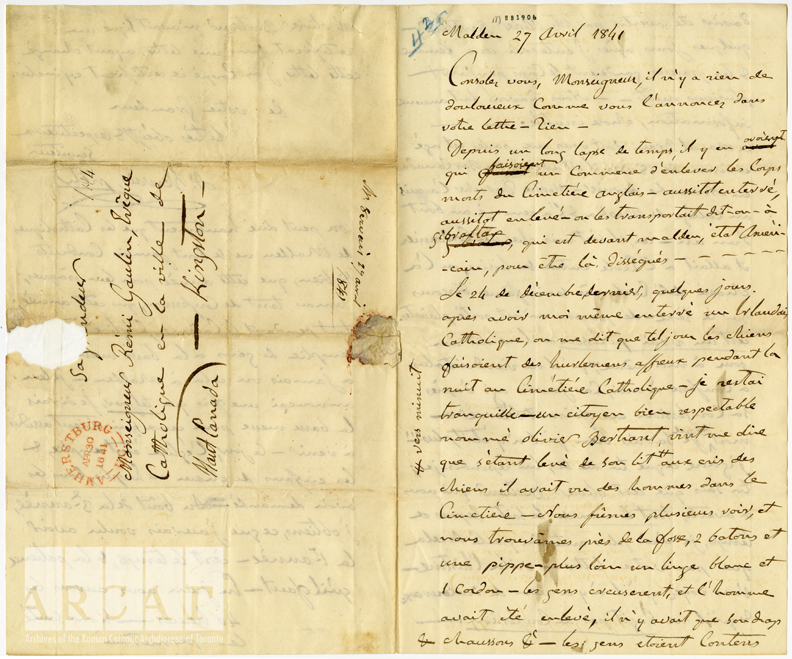 Counting on the Zeal and Obedience of the Clergy and People: The First Rules in the Archdiocese of Toronto

The Synod of Bishops is an international group of Church leaders who meet to discuss topics of universal importance to the Church at the request of the Pope. The Synod was created by Pope Paul VI in 1965. Subjects for discussion have included evangelization, catechesis, formation of priests, consecrated life, and the Eucharist, among others.

Assemblies of Church leaders have been happening since the early days of Christianity. In the early years of the Archdiocese of Toronto, diocesan synods were held. A diocesan synod is a meeting of local clergy to advise the bishop on matters of  policy. This week we highlight some documents from the archives related to the earliest synods in the Diocese of Toronto.

The first synod was called by Bishop Michael Power in 1842. The record of the decisions that were made were recorded in a letter book in Latin. In his book Michael Power: The Struggle to Build the Catholic Church on the Canadian Frontier, Mark McGowan describes the twenty-two constitutions that resulted from the synod as covering,


"a variety of things, including norms for sacramental and liturgical life, church construction, lay responsibilities in parish life, and parish finances. Confessional boxes and baptismal fonts were mandated in all churches. Proposed marriages had to conform strictly to the directives of canon law ... In addition, all parish priests had to keep accurate and up-to-date registers of baptisms, confirmations, marriages, and burials" (pp. 151-152).

The third synod of the diocese was held by Bishop de Charbonnel on September 13th, 1853 at St. Michael's College. Only five decisions were recorded:


In the 1860s, under the direction of Bishop Lynch, a list of rules was compiled as they had been written so far from previous diocesan synods, as well as rules from provincial synods and canon law. The rules were divided into several chapters, with headings such as "Of the Parish Priest," "Of the Cemetery," and "Chant." To Bishop Lynch, it was important to codify the rules of the diocese to ensure that as many souls as possible were saved.

In an introduction Lynch wrote, "Rules are necessary in every station and calling of life - the mechanic or merchant who works without rule and order is certain of failure and ruin. Ignorance of rule is as fruitful a source of many fatal mistakes as contempt of the rule itself. The priest of the Most High, whose office is the continuation of the office of Jesus Christ himself as mediator and whose duty is to dispense his merciful gifts to men for their salvation is also to be guided by rule."

In the front of the book we found inscribed "I did not command or forbid anything under pain of suspension or inderdict. This, I find, was a mistake." This was presumably written by Bishop Lynch, although we don't know for sure, and we don't know when it was written. Nonetheless, it's an interesting sentiment!
Posted by ARCAT at 14:33 No comments:

Record of the Week: Battle at the Polls

Monday is Election Day in Canada!

Past archbishops have involved themselves in politics to varying degrees. Archbishop John Lynch was often thrust into the public limelight when it came to furthering the well-being of his Church and fellow Irish Catholics. His episcopacy (1860-1888) saw the Confederation of Canada, as well as growing tensions between Catholics and Protestants.

Then and now, bishops have been consistent in compelling the faithful to vote. Concerning the 1886
provincial election, Archbishop Lynch told Catholics, "The battle is to [be] fought at the polls. - Those who do not go, fail in their duty to themselves and their children."

Similarly, the 2015 Federal Election Guide, published by the Canadian Conference of Catholic Bishops, urges that "Canadian Catholics are being called upon as citizens to exercise their right to vote."

Voting is a right and responsibility, so do your duty on Monday!

This month in our Year of Consecrated Life series we are featuring the Sisters of St. Joseph of Toronto, who arrived in the city on October 7th, 1851.

In the history of the Catholic Church, a lot of the hardest social work has been taken up by Religious Sisters. Orders of women religious have been responsible for running hospitals and schools as well as reaching out to vulnerable and marginalized populations.

One of the earliest orders to come to Toronto was the Congregation of the Sisters of St. Joseph (CSJ). The congregation was originally founded in Le Puy-en-Velay, France in 1648. Like so many other orders, the Sisters were disbanded during the French Revolution, and many of the members were jailed or executed. One of the Sisters, Jeanne Fontbonne, was able to refound the order in 1807 in Lyons. In 1836, a group of Sisters was sent to St. Louis, Missouri, and in 1851, four Sisters from that group led by Sister Delphine Fontbonne headed to Toronto at the request of Bishop de Charbonnel.

The work of the Sisters of St. Joseph quickly expanded. They became health care workers, educators, and cared for the city's poor. In Toronto, they founded House of Providence, Sunnyside / Sacred Heart Orphanage, St. Michael's Hospital, Our Lady of Mercy Hospital, St. Joseph's Hospital, and St. Joseph's College. Sisters from Toronto went to Hamilton, London, Barrie, and other Ontario places as well as expanding into Western Canada.

Lettuce know if you'll turnip for the harvest!

It was not so long ago that parts of urban and suburban Toronto were used for agricultural purposes. When St. Augustine's Seminary opened in 1913 on the Scarborough Bluffs, the seminarians and faculty lived off the land:


"[T]he seminary grounds also included a farm with cows, pigs, and hens, which in the first three decades served as the principal source of the Seminary's food supply. An apple orchard stood north of the original Seminary building, and in the earliest years a vineyard was cultivated in order to provide Mass wine." *