Who Are You Voting For?

The Canadian Federal Election will be held next month on October 19th, and there will be new Members of Parliament in many ridings across the country. Here in the archives, we have correspondence with many MPs, but we were curious to see how many Prime Ministers' signatures we could find. Out of the 22 who have held the job, we were able to find 16. Not too shabby!

In order of appearance, we have:

Stephen Harper's signature is probably somewhere in the building, but not yet in the archives!

Click here to read the Canadian Bishops' guide to voting in the upcoming election, and click here for information about voter registration. Don't forget to make your voice heard! 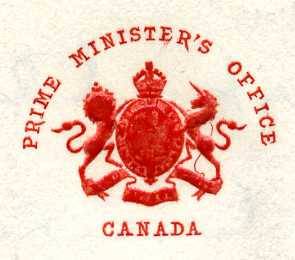 Record of the Week: Reign of Queen Elizabeth II

After her uncle King Edward VIII abdicated, Elizabeth unexpectedly became second-in-line to the throne. The queen's reign began on February 6, 1952 when her father, King George VI, died. Elizabeth II's coronation took place on June 2, 1953 and was the first to be aired on television.

At the time of Her Majesty's accession, James Cardinal McGuigan was the Archbishop of Toronto. As the senior cardinal and ranking prelate of the Roman Catholic Church in Canada, His Eminence sent words of sympathy and acknowledgement to the new Queen of Canada. In the archives, we have the monarch's brief response, sent via telegraph:


The queen signs official documents "Elizabeth R". The "R'' stands for regina, which is Latin for queen.
Posted by ARCAT at 10:55 No comments: