In honour of Canada Day, we wanted to post some early English versions of “O Canada” that we found in our archives. O Canada was the de facto national anthem of Canada since 1939, but only became the country's official national anthem on July 1, 1980 after Canada's National Anthem Act received royal assent.

O Canada was initially written to honour the Quebec National Holiday, St. John Baptiste Day. In 1880, the Honorable Theodore Robitaille, Lieutenant-Governor of Quebec, commissioned Adolphe-Basile Routhier to write lyrics and Calixa Lavallée to compose the music for a song to commemorate the holiday.

The song was performed for the first time on June 24, 1880 under the original name "Chant National". O Canada quickly spread through French Canada, but it would take another twenty years before the song would gain popularity in English Canada.

The earliest published English version of O Canada was written by Dr. Thomas Bedford Richardson in 1906. We found the typed lyrics of Richardson's version within Archbishop McNeil's fonds:
﻿

There have been several English versions of O Canada since Dr. Richardson's was first published. The English version we sing today is based largely on the lyrics written by Robert Stanley Weir in 1908, however even these lyrics have been revised several times since then.

We were also interested to find a version of O Canada from 1917 that was approved by Sir Routhier as being an "exact English rendering of the original text."
﻿﻿﻿﻿

There are now three official versions of O Canada: French, English and Bilingual. You can find out more about the history, lyrics, and proper etiquette surrounding anthem use here.

On Tuesday evening, ARCAT staff had the pleasure of attending the book launch of Extraordinary Ordinaries by Fr. Séamus Hogan, a priest of the Archdiocese of Toronto.

Although there have been books written about some of Toronto's Catholic bishops and archbishops, this is the first time that biographies of all twelve ordinaries - from Bishop Michael Power to our current Cardinal Thomas Collins - have been brought together in one coherent volume. The book attempts to reach a broad readership with stories of how these Catholic leaders responded to the social, economic and political events of their times in extraordinary ways.

This book is the capstone of the Archdiocese of Toronto's 175th Anniversary celebrations. (It is now available for purchase.) 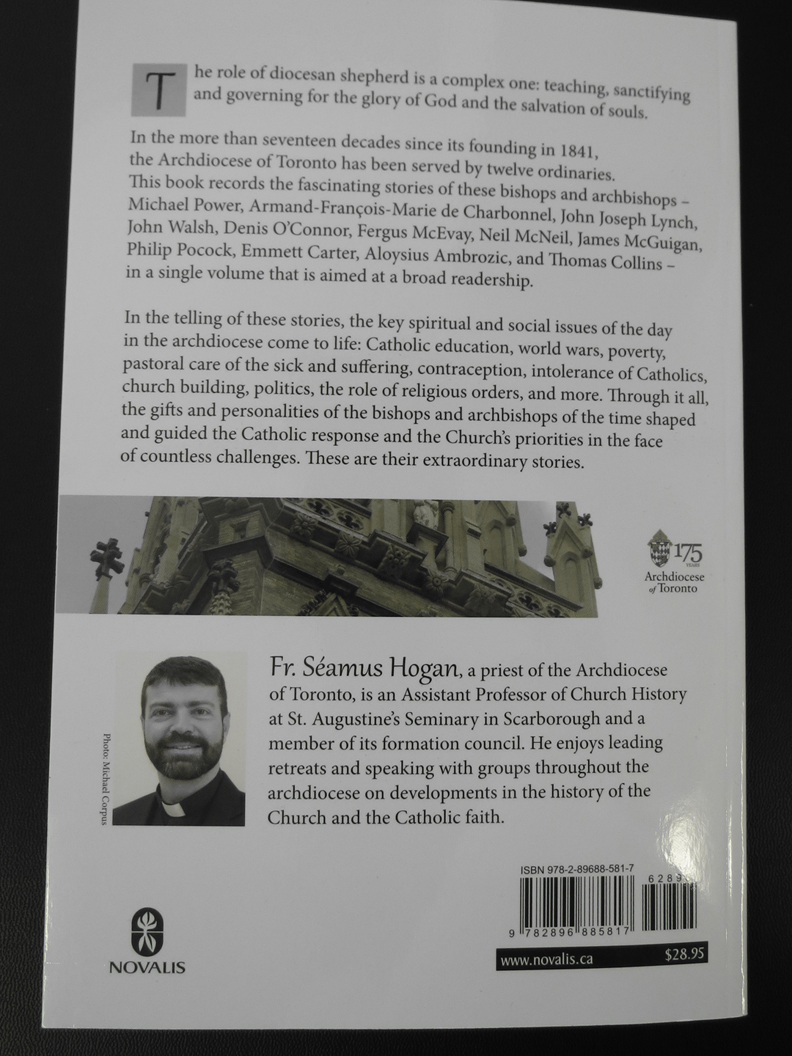 Tell Me, Where Do the Children Play?

Archbishop McNeil was the kind of person who really took an interest in the welfare of the people of the city. It is evident from the records that he wanted to improve the lives of the citizens in his care, so it came as no surprise to discover that he was on the board of the Toronto Playgrounds Association for several years starting in 1913.

At the turn of the century, Toronto's continued growth had given rise to neighbourhoods like St. John's Ward where it was too easy for children to get into mischief when they weren't in school. A movement grew to address this problem by constructing places for children to participate in organized activities.

Toronto's first supervised playground was opened in 1909 in St. Andrew's Square, which is located near Adelaide St. and Brant St. The Globe newspaper described the facilities:

"The ground, which is rather dusty at present, is divided into two parts, the easterly half being devoted to the girls and very small boys, and the westerly half to larger boys. A wire fence encloses the whole ground, and girls and larger boys are separated by a wire fence... The supervision is under the charge of the Toronto Playgrounds Association...

"The boys' section of the ground is equipped with parallel bars, teeters, giant stride or maypole, trapeze, swinging rings and rope ladders. The girls' section is provided with swings, giant stride or maypole, sand courts, teeters, basket ball, and a slide resembling a chute, the last-named being the most popular attraction on the ground, so far as the small tots are concerned. The ground is to be open from 9 a.m. until 8.30 every day, except Sunday. When the schools reopen no school children will be admitted during school hours." (The Globe, August 12 1909, p. 12)


For more on the beginning of Toronto's playgrounds, check out the excellent website from last year's City of Toronto Archives exhibition From Streets to Playgrounds.

Today, the City of Toronto's website lists 794 playgrounds. With this handy map, it's easy to find the one closest to you so you can get out there and play!
Posted by ARCAT at 16:59 No comments:

Today is the anniversary of the canonization of the Twenty-Six Martyrs of Japan who were crucified in Nagasaki in 1597.

In the beginning, missionary efforts in Japan were quite successful. Catholicism was introduced in 1549 by Jesuit priests from Spain, led by Francis Xavier (read our post about his relics here). The local feudal lords, military and imperial government allowed the Jesuits to establish Catholic missions in the hopes of curtailing the influence of Buddhist monks, as well as improving trade relations with Spain and Portugal.

However, as the numbers of Catholics rose to 300,000 over the following decades, Japanese rulers became more wary of the threat of colonialism. Christianity was banned and the Jesuits were expelled, though these decrees were not particularly well enforced.

In 1596, a Spanish trade vessel was shipwrecked along the coast of Japan and looted by the local lord. It caused a huge political incident with implications that Spain had sent missionaries to Japan to infiltrate the society in anticipation of a military conquest. The Japanese response was the crucifixion of 26 Catholics: six Franciscan missionaries including four Spaniards, one Mexican (St. Philip of Jesus, the first North American to be canonized), and one Indian; three Japanese Jesuits, including the revered St. Paul Miki; and seventeen Japanese laymen including three young altar boys.

Without leadership, the Church in Japan disintegrated until Western missionaries returned in the 19th century.

The connection to the Archdiocese of Toronto is that our third bishop, Most Rev. John Lynch, travelled to Rome to attend the martyrs' canonization by Pope Pius IX on June 8, 1862.


Two years later, Bishop Lynch blessed a new mission church in Bradford, Ontario, dedicating it to the Twenty-Six Japanese Martyrs. In 1940, the mission was split from St. John Chrysostom, Newmarket, and erected as a separate parish, Holy Martyrs of Japan.

To the Catholic Electors of South Ontario!

Once again Ontarians are being bombarded with messages from all sides about important issues in the upcoming provincial election. With the rise of different forms of media, campaigns have reached new heights of vying for our attention, and the constant noise can feel overwhelming.

Here in the archives, we found that fervent lobbying efforts are nothing new. People of the past were just as passionate about the issues that affected them, and they wanted to make sure that the voters were on their side.

In the 1870s, one group didn't want anyone to vote for the incumbent Premier Oliver Mowat, who they claimed insulted Catholics:


In 1934, the Catholic Taxpayers' Association wrote to the heads of colleges, convents, and hospitals to ask them to vote for the Liberal party because they believed the Conservative party was dominated by the Orange Order:

Cardinal McGuigan sent word specifically to the people of Trinity riding asking them to vote to defeat the local Communist candidate:


Archbishop McNeil saved a circular released by the Knights of the Ku Klux Klan of Canada that asked the electors of New Brunswick not to vote for Catholics, as they were considered 'Romans':

Making sense of the rhetoric coming from all sides wasn't easy, but the Bishops of Toronto reminded Catholics that it was important to make their voices heard. Pastors were instructed not to publicly take a particular side, but to encourage their parishioners to take advantage of their right to vote.


The Church continues to encourage Catholics to learn about the issues and participate in our democracy. To help make sense of what the candidates are saying, Catholic Charities of the Archdiocese of Toronto has released a 2018 Ontario Election Guide, as well as a list of questions to ask. Check them out, and stand up on June 7 to make your voice heard!
Posted by ARCAT at 15:03 No comments: